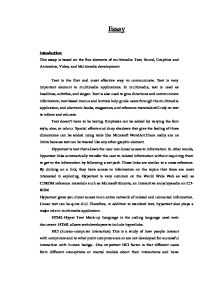 Essay Introduction: This essay is based on the five elements of multimedia: Text, Sound, Graphics and Animation, Video, and Multimedia development. Text is the first and most effective way to communicate. Text is very important element to multimedia applications. In multimedia, text is used as headlines, subtitles, and slogan. Text is also used to give directions and communicate information, text-based menus and buttons help guide users through the multimedia application, and electronic books, magazines, and reference materials still rely on text to inform and educate. Text doesn't have to be boring. Emphasis can be added by varying the font style, size, or colour. Special effects and drop shadows that give the feeling of three dimensions can be added using tools like Microsoft WordArt.There really are no limits because text can be treated like any other graphic element. Hypertext is text that allows the user non-linear access to information. In other words, hypertext links automatically transfer the user to related information without requiring them to get to the information by following a set path. These links are similar to a cross-reference. By clicking on a link, they have access to information on the topics that there are most interested in exploring. Hypertext is very common on the World Wide Web as well as CDROM reference materials such as Microsoft Encarta, an interactive encyclopaedia on CD-ROM. Hypertext gives you direct access to an entire network of related and connected information. ...read more.

A Wave file is recognized by a file name extension of WAV (.wav). Used primarily in PCs, the Wave file format has been accepted as a viable interchange medium for other computer platforms, such as Macintosh. This allows content developers to freely move audio files between platforms for processing, for example.In addition to the uncompressed raw audio data, the Wave file format stores information about the file's number of tracks (mono or stereo), sample rate, and bit depth. A sequencer is a program in a computer or stand-alone keyboard unit that puts together a sound sequence from a series of Musical Instrument Digital Interface (MIDI) events. The MIDI sequencer allows the user to record and edit a musical performance without using an audio-based input source. 3-Animation & Graphics Animation: is a series of images but together to give the effect of movement. Animation is used to add visual interest or illustrate attention to important information or links in a multimedia application. Animation is commonly used in advertising marketing, movies because the movement of animation take a user attention Graphics are any type of image produce using the computer. 2D and 3D images are important to multimedia development. In fact, multimedia applications are mostly graphics. Adding just the right graphic and just the right number of graphics may help the user learn and retain more information in less time and with less effort. ...read more.

This rich communications technology offers new possibilities for schools, colleges, and libraries, who are now using videoconferencing systems for a variety of purposes, including formal instruction (courses, lessons, and tutoring), connection with guest speakers and experts, multi-school project collaboration, professional activities, and community events Video can be the most exciting feature of multimedia application. A video clip or an animation sequence can express an idea in a much better way than text or images. Video clips used in multimedia systems are more flexible in the sense that they are EASIER TO EDIT and also EASIER TO ACCESS. Video format-A video format describes how one device sends a video pictures to another device, An example would be the way that a DVD player sends pictures to t.v or a computer to a monitor. More formally, the video format describes the sequence and structure of frames that create the moving video image. Copyright laws on the video- A copyright is a form of intellectual property that grants its holder the legal right to restrict the copying and use of an original, creative expression, such as a literary work, movie, musical work or sound recording, painting, computer program, or industrial design for a defined period of time. Compression and decompression Virtual reality. Virtual Reality is generally speaking an attempt to provide more natural, human interfaces to software. It can be as simple as a pseudo 3D interface or as elaborate as an isolated room in which the computer can control the user's senses of vision, hearing, and even smell and touch. ...read more.