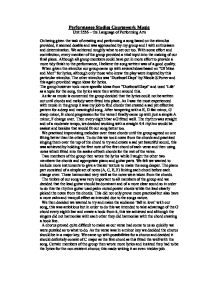 The group however took more specific ideas from &quot;Dustbowl Days&quot; and used 'Life' as a topic for the song, the lyrics were then written around this. As far as music is concerned

Performance Studies Coursework Music Unit 2556 - the Language of Performing Arts On being given the task of creating and performing a song based on the stimulus provided, it seemed doable and was approached by my group and I with enthusiasm and determination. We achieved roughly what to set out too. With some effort and contribution, every member of the group provided a vital input into the making of our final piece. Although all group members could have put in more effort to provide a more tidy finish to the performance, I believe the song written was of a good quality. When given the stimulus our group came up with several ideas based on "Of Mice and Men" for lyrics, although only those who knew the play were inspired by this particular stimulus. The other stimulus was 'Dustbowl Days' by Nicole S.Porter and this again provided vague ideas for lyrics. ...read more.

The piano part consisted of a simple set of notes (A, C, E, F) linking each chord before each change over. These harmonised very well as the notes were taken from the chords. The timbre of our song was very important to all members of the group and we decided that the lead guitar should be dominant and of a more clear sound so in order to do this the rhythm guitar used palm muted power chords while the lead clearly picked the notes from the chords. This did not only prove more practical but also have a more calm and tranquil effect as intended due to the songs nature. We then decided we wanted to try and make the audience 'fall in love' with our song, this was ambitious but in order to do this we intended to take advantage of the G chord every eighth bar and create a hook from it, this we achieved and although the singers did not harmonise with each other they did harmonise with the chord creating a hook line. ...read more.

but one of the members of our group had decided to change the structure of our song at short notice, therefore the song did not end properly as not all group members had been informed of the removal of one of the verses. The part of the song that did go to plan was played pretty well and with little mistakes. Intentions were met as far as the audience were concerned although our mistake was noticeable it was not really commented upon. Little feedback was given but the audience responded all the same as the general tranquillity of the song was felt by most. If we got the chance to make and perform a song again I would insure more harmonising was done to create a deeper feel in timbre, and possibly more instruments were used including drums to maintain time. I would also ensure all group members were at rehearsals as appose to just two, this would mean more work could be put in to a shorter space of time. ...read more.