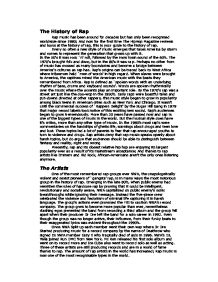 The History of Rap

The History of Rap Rap music has been around for decades but has only been recognised worldwide since 1980; And now for the first time The HipHop Magazine reviews and looks at the history of rap, this is your guide to the history of rap. Every so often a new style of music emerges that takes America by storm and comes to represent the generation that grows up with it. In the 50's it was rock `n' roll, followed by the mow town sound of the 60's. The 1970's brought folk and disco, but in the 80's it was rap. Perhaps no other from of music has crossed as many boundaries and become a bridge between America's cultures as rap has. ...read more.

Rap's audiences began to grow tremendously. More than 20 years have passed now and rap is one of the biggest types of music in the world. But the musical style does have it's critics, more than any other type of music. In the 1980's most rap's were commentaries on the hardships of ghetto life, warnings about drugs and teen love and l**t. These topics led a lot of parents to fear that rap encouraged youths to turn to violence and drugs. Rap artists deny that rap music speaks openly about harsh topics, but do argue that audiences should be able to distinguish between fantasy and reality, right and wrong Presently, rap and its closest relative hip hop are enjoying its largest popularity ever as a result of its mainstream acceptance; And thanks to rap artists like Eminem and Kid Rock, African-Americans aren't the only ones listening anymore. ...read more.

Even though the group was no longer active, their influence, from their funky beats to their exaggerated lyrics was evident throughout the 1990's. Once NWA Split up each member went their own way where Dr Dre Started producing music for a record company by the name of Deathrow who signed Ex NWA member Eazy E who tragically died of aids in 1996. NWA's DJ, Yella joined Run DMC from New York. Mc Ren released his first solo album and went on to record more and Ice Cube also went to record solo as well as acting. Three of these artists are still producing records and are in a world of fame thanks to rap. The amount of rap artists in the world has increased; Rap music is now one of the most recognisable types in the world. ...read more.