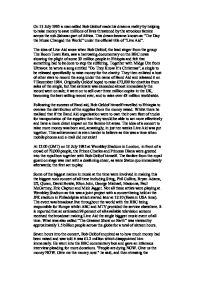 The idea of Live Aid arose when Bob Geldof, the lead singer from the group The Boom Town Rats, saw a harrowing documentary on the BBC news showing the plight of some 30 million people in Ethiopia

On 13 July 1985 a man called Bob Geldof made his dream a reality by helping to raise money to save millions of lives threatened by the atrocious famine across the sub-Saharan part of Africa. This dream became known as "The Day the Music Changed the World" under the official title of "Live Aid". The idea of Live Aid arose when Bob Geldof, the lead singer from the group The Boom Town Rats, saw a harrowing documentary on the BBC news showing the plight of some 30 million people in Ethiopia and felt that something had to be done to stop the suffering. Together with Midge Ure from Ultravox he wrote a song entitled "Do They Know It's Christmas", a single to be released specifically to raise money for the charity. They then enlisted a host of other stars to record the song under the name of Band Aid and released it on 7 December 1984. ...read more.

At 12:00 (GMT) on 13 July 1985 at Wembley Stadium in London, in front of a crowd of 72,000 people, the Prince Charles and Princess Diana were greeted into the royal box together with Bob Geldof himself. The fanfare from the royal guard on stage was met with a deafening cheer, as were Status quo immediately afterwards; the first act to play. Some of the biggest names in music at the time were involved in making this the biggest rock concert of all time including Sting, Phil Collins, Bryan Adams, U2, Queen, David Bowie, Elton John, George Michael, Madonna, Paul McCartney, Eric Clapton and Mick Jagger. Not all these artists were playing at Wembley Stadium as this was a joint project with a concert being held at the JFK stadium in Philadelphia which started later at 13:10 (Eastern USA time). ...read more.

It was estimated the day after that �40-50 million had been raised however the final figure as a direct result of the concerts is closer to �110 million and is still rising with the recent release of the Live Aid DVD. In July 2005, twenty years after the Live Aid concerts, he organised the Live 8 Gala which was a support event for the African nations involved in the G8 summit. Five days later the G8 leaders met and the following promises were made; $50 billion more aid per year by 2010, AIDS drugs to all those who need them, and care for all AIDS orphans and debt cancellation for 18 countries. For his efforts within famine relief and charity, Bob Geldof received an honorary knighthood from Her Majesty Queen Elizabeth II. Although not entitled to become a knight due to being a citizen of Ireland, he is often referred to as Sir Bob Geldof and no one could deserve the title more. ...read more.