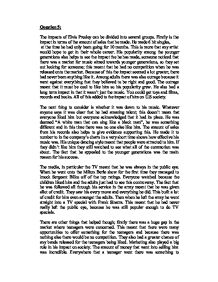 The impacts of Elvis Presley

Question 5: The impacts of Elvis Presley can be divided into several groups. Firstly is the impact in terms of the amount of sales that he made. He made 6 hit singles, at the time he had only been going for 10 months. This is more that any artist would hope to get in their whole career. His popularity among the younger generations also helps to see the impact the he has made, someone noticed that there was a market for music aimed towards younger generations, so they set out looking for someone; this meant that he had no competition when he was released onto the market. Because of this the impact seemed a lot greater, there had never been anything like it. Among adults there was also outrage because it went against everything that they believed to be right and good. The outrage meant that it must be cool to like him so his popularity grew. ...read more.

The fact that he appealed to the younger generations was the main reason for his success. The media, in particular the TV meant that he was always in the public eye. When he went onto the Milton Berle show for the first time they managed to knock Sergeant Bilko off of the top ratings. Everyone watched because the children liked him and the adults just had to see this controversy. The fact that he was followed all through his service in the army meant that he was given allot of credit. They saw his every move and everything he did. This built a lot of credit for him even amongst the adults. Then when he left the army he went straight into a TV special with Frank Sinatra. This meant that he had never really left the public eye, because he was still popular enough to do TV specials. ...read more.

There were so many of them and so many people went to see them, even if he was the worst actor ever and the plots were all the same. This meant that for the first time ever there were films specifically directed at the younger generation, adults didn't approve so the most sensible thing to do was to go and see it, if only to annoy the adults. So all in all there are there are many reasons why his impact on society was so great. I think that it can best be described as a combination of things. His films and TV specials all help towards making him popular, but I think that the thing to remember is people ultimately know him for his music. This is why I believe that his impact on society was so great. If you think about all of the other things, they only came because of the music, he was only found because he could sing. ?? ?? ?? ?? ...read more.