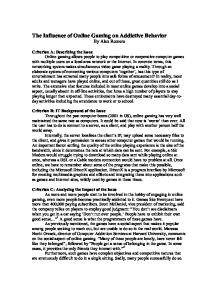 The Influence of Online Gaming on Addictive Behavior

The Influence of Online Gaming on Addictive Behavior By Alan Romero Criterion A: Describing the Issue Online gaming allows people to play competitive or cooperative computer games with multiple users on a local area network or the Internet. In concrete terms, this networking system makes simultaneous video game playing a reality. Through an elaborate system of connecting various computers 'together', has this type of entertainment has attracted many people into safe forms of amusement? In reality, most adults and teenagers have played online, and out of those, great quantities still do as I write. The extensive chat features included in most online games develop into a social aspect, usually absent in off-line activities, that lures a high number of players to stay playing longer than expected. These enticements have destroyed many essential day-to-day activities including the attendance to work or to school. Criterion B: IT Background of the Issue Throughout the past computer boom (2001 in US), online gaming has very well maintained the same rate as computers. ...read more.

People have to exhibit their own good sense..."1 A good sense is what the programmers of these games have. As previously mentioned, the games have a social aspect that makes it popular among people seeking to reach out, but are unable to do so in the real world. Maressa Hecht Orzack, director of Computer Addiction Services at Harvard University, comments on the social aspect of online gaming. "Many of these people are lonely, have never felt like they belonged", followed by "People get a sense of belonging in the game. In some cases, it provides the only friends they interact with."2 Furthermore, such games have complex objectives and competitive natures that are strenuously difficult to do in a single sitting. Sadly, many people successfully do so. After finishing with one objective or goal, many more come along and the desire to 'beat the game', or in this case, 'beat everyone' have caused plenty of people to invest time in something that stops being a hobby, but an addiction. ...read more.

Concerning likely effectiveness, the solutions proposed, I think, are inarguably attainable (but could be arduous). Limiting the amount of time allowed to play online could very much stop all existing online addiction. The creation of a competition could be more effective, since it would attract people to other similarly interesting hobbies, making them more popular and further attracting even more people to the 'safe' hobby; whereas limiting the amount of online gaming can be a legally rigorous process, possibly ending in no gain. In the other hand, the creation of competition has, I think, more chances of being successful in stopping, or at least, diminishing the effects of online gaming on addictive behavior. Criterion E: Selecting and Using Sources Becker, David. "Games junkies--hooked on 'heroinware'?." ZDNet News 04/12/02. Hardware. 10/10/02 <http://zdnet.com.com/2100-1103-881813.html>. Miller, Stanley. "Death of a game addict." Journal Sentinel Online 03/30/02. News. 10/15/02 <http://www.jsonline.com/news/state/mar02/31536.asp>. Morton, David. "Study sounds alarm over video game use." Simon Fraser News 04/02/98. News. 10/13/02 <http://www.sfu.ca/mediapr/sfnews/1998/April2/kline.html>. ...read more.