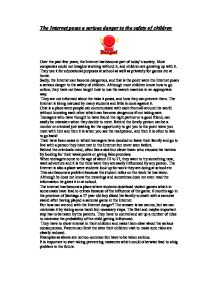 The Internet poses a serious danger to the safety of children.

Their have been cases in which teenagers have decided to leave their family and go to live with a person they have met in the Internet but never seen before. Behind the criminals mind, often lies a sick but clever brain who chooses his victims by looking for their weak points or giving fake promises. When teenagers come to the age of about 12 to 17, they want to try something new, want adventure and it is the time were they are easily influenced by any person. The Internet is also a place were students look up for work they are doing at school etc This can become a problem because the student relies on the work he has taken. ...read more.

But how can we end with the Internet danger? The answer is we cannot, but we can minimise it by taking some harsh but necessary steps. The first and maybe important step has to be taken by the parents. They have to control and set up a number of rules to minimise the probability of the child getting influenced. They have to show interest in their children and make them clear about the serious consequences. Parents can limit the sites their children visit to make sure risks are clearly reduced. Examples as above are not too common but have to be taken serious. It is important to start taking preventing measures which could otherwise lead to a big problem in the future. ...read more.