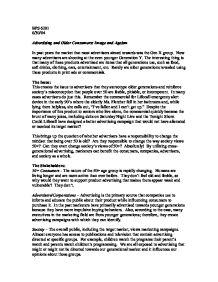 BPS 6201 6/30/04 Advertising and Older Consumers: Image and Ageism In past years the market that most advertisers aimed towards was the Gen X group. Now many advertisers are shooting at the even younger Generation Y. The interesting thing is that many of these products advertised are items that all generations use, such as food, soft drinks, clothing, cars, entertainment, etc. Rarely are older generations revealed using these products in print ads or commercials. The Issue: This creates the issue to advertisers that they stereotype older generations and reinforce society's misconception that people over 50 are feeble, pitiable, or incompetent. In many cases advertisers do just this. Remember the commercial for Lifecall emergency alert device in the early 90's where the elderly Ms. Fletcher fell in her bathroom and, while lying there helpless, she calls out, "I've fallen and I can't get up." Despite the importance of this product to seniors who live alone, the commercial quickly became the brunt of many jokes, including skits on Saturday Night Live and the Tonight Show. ...read more.

Utilitarianism Theory: Cross-generational advertising is a method of marketing that illustrates many generations using the same products without segregating or degrading any generational groups. This will produce the greatest long-term benefits to the most number of stakeholders. First, using models from Generation Y through the GI Generation will create awareness and a better understanding of age diversity in the consumer market. In turn, stereotypes of older generations will be broken. This could lead to a social and economic breakthrough. Older generations will feel more accepted in society and will have the urge to be more active. As they become more active, greater consumer spending is generated which benefits the corporation's overall profits and its stockholders. Free Market Theory: According to the IPC Magazine survey identified in the case, 62% of women prefer to see women their own age advertising products towards them1. In addition the over-50 age groups claim the majority of wealth and generate over 51% of consumer spending in the United States2 (see Graph). ...read more.

In the end, future retribution will be given to millions of older Americans as age discrimination in the media is diminished. Social Contract Theory: In the end, advertisers need to gain the trust of their consumers. As long as they continue to mock older generations or ignore them all together, they run the risk of "punitive reactions - consumer boycott, regulation, media hostility, financial loss, and above all loss of reputation1." They also owe society a picture of reality when it comes to the aging population. The Baby Boomer generation, with a population of 76 million, is the largest and most economically powerful demographic group in the US3. As a majority of this group has already passed the 50-year mark and the rest are soon to follow, an accurate depiction of our modern day aging process is needed because eventually everyone will pass through these same life stages. Sources: 1. Business Ethics: A European Review. January 2000, Vol. 9 - No. 1. 2. Let's Talk Business. September 2002, Issue 73. www.uwex.edu/ces/cced. 3. Business Ethics: A Stakeholder and Issues Management Approach. 2003, pg. 214. ...read more.