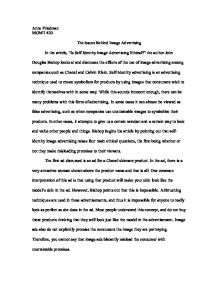 The Issues Behind Image Advertising

Anne Friedman MGMT 420 The Issues Behind Image Advertising In the article, "Is Self Identity Image Advertising Ethical?" the author John Douglas Bishop looks at and discusses the effects of the use of image advertising among companies such as Chanel and Calvin Klein. Self-Identity advertising is an advertising technique used to create symbolism for products by using images that consumers wish to identify themselves with in some way. While this sounds innocent enough, there can be many problems with this form of advertising. In some cases it can almost be viewed as false advertising, such as when companies use unattainable images to symbolize their products. In other cases, it attempts to give us a certain mindset and a certain way to look and value other people and things. Bishop begins his article by pointing out that self-identity image advertising raises four main ethical questions, the first being whether or not they make misleading promises to their viewers. The first ad discussed is an ad for a Chanel skincare product. ...read more.

The third ethical question Bishop asks is whether or not these advertisements actually cause harm to the viewer. To address this question, he explains the concept of gaze. It is through the viewer gaze that we put ourselves in the place of the image in the ad, and enjoy the implied gaze we receive form whoever we wish to be gazing back at us. However, it is the implied gaze that gives us the feeling that we are constantly being viewed and judged by others. The harm begins when viewers begin reading themselves into the ads, forcing them to re-examine their own personal identity. This leads to feelings of insecurity and can substantially hurt one's self-esteem. Bishop also points out that this technique unfortunately works best when used on already marginalized groups, such as woman and adolescents. By advertising impossible images, and inviting the consumer to put themselves in place of those images, self-identity ads are having detrimental effects on people's self-esteems. The fourth and final ethical question Bishop raises is whether or not these ads threaten the autonomy of the individual. ...read more.

We are able and willing to put ourselves in the place of the image in the ad and imagine what it would be like to be them. Image ads also contribute to our economy by creating something of value that people are willing to spend their money on. The symbolism created in image ads can be harmful to the viewer if they read so far into it that it can affect their self-esteem. When this happens, the author and I agree that image ads can be harmful. These ads often target already insecure groups of people, such as women, and therefore self-esteems are often affected. This debate of image ads is a utilitarian debate. In this case, the greatest good for the greatest amount of people would probably be to reduce the number of image ads in the media. I agree with Bishop that the constant viewing of the same sort of ads over and over again is what makes them even more harmful. However, self-identity image advertising is and will continue to be an effective and money making technique used over and over by many clothing, cosmetic, and other companies who sell non-necessity items. ...read more.