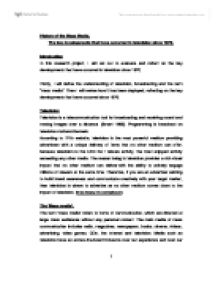 The key developments that have occurred in television since 1970.

History of the Mass Media. The key developments that have occurred in television since 1970. Introduction In this research project, I will set out to evaluate and reflect on the key developments that have occurred in television since 1970. Firstly, I will define the understanding of television, broadcasting and the term "mass media". Then I will review how it has been deployed, reflecting on the key developments that have occurred since 1970. Television Television is a telecommunication tool for broadcasting and receiving sound and moving images over a distance. (Smart 1995). Programming is broadcast on television stations/channels. According to ITV's website, television is the most powerful medium providing advertisers with a unique delivery of fame that no other medium can offer, because television is the UK's No.1 leisure activity, the most enjoyed activity exceeding any other media. The reason being is television provides a rich visual impact that no other medium can deliver with the ability to actively engage millions of viewers at the same time. Therefore, if you are an advertiser wishing to build brand awareness and communicate creatively with your target market, then television is where to advertise as no other medium comes close to the impact of television. (http://www.itv.com/about/). The 'Mass media'. The term 'mass media' refers to forms of communication, which are directed at large mass audiences without any personal contact. ...read more.

The competition organisers for instance, The Premier League, Wimbledon Lawn Tennis Association, International Olympic Committee, etc. sell these broadcasting rights. Using the money to pay player's salaries, improving facilities and playing grounds. Only on Pay-Per-View television, sports like boxing are shown, and the funds from this go mainly to pay out the enormous prize money awards. According to Football clubs, the only way they can attract the best players is by charging large sums for the rights to broadcast their games and the amplified amounts of money collected by football shown on Pay-Per-View Television, often help fund youth programs, and helps in promoting healthier lifestyles. Some people argue that the best teams will get larger amounts of money for the rights to their matches and then buy the best players. Thus, this will leave teams that are lower down in the ranking, unable to raise the money necessary to attract competitive players. Consequently, the rich teams will carry on winning and earning more money. Additionally some people argue that if broadcasters are forced to bid higher and higher for one sport, football in this case, because there is not enough money left other sports could lose out. Therefore, could this have an effect on less popular sports, depriving them of essential funding? (http://www.bbc.co.uk/schools/gcsebitesize/pe/history/influencesrev2.shtml) In November 1998 was the public launch of 'ONdigital', then replaced by 'Freeview' in 2002, (Digital Terrestrial Television - DTTV or DTT or DVB-T).Using the 'Freeview' and 'Top Up TV' platforms the UK leads the world in DTT uptake by the general population Digital terrestrial television (DTTV) ...read more.

However, others argue that the wealth of information provided by the mass media encourages and promotes a variety of opinions, and this enables the population to be informed on a wide range of issues. For example, one side argue that the media promote democracy by giving an unbiased account of news and that television news has to be partial. However, in research of ITV and BBC news by Gaber in 1997 whilst searching to identify the main sources of political news on television, it revealed that politicians themselves were the most important single source. (Gaber 1997, http://www.psa.ac.uk/cps/1998%5Cgabor.pdf). Therefore, biased influence must be portrayed to the world by the television news. Conclusion Almost every country in the world now has developed at least one television channel. Television has grown up all over the world, enabling every country to share characteristic of their culture and society with others. However, with the increasing number of television channels, the growing popularity and competition along with the intensifying demand for more programming, it will become more difficult for the government to control the content of television. Of the past forty years, the rising influences of television is probably the most important development in the media, and according to Gidden (2002 P452), "If current trends in television watching continue, by the age of eighteen the average child born today will have spent more time watching television than in any other activity except sleep". (Word count: 2,238). ...read more.