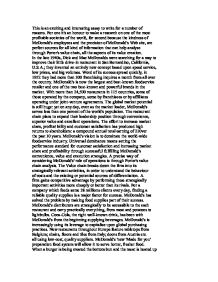 the kindness ofMcDonald's employees and the precision of McDonald's Web site, areperfect sources for all kind of information that can help analysethrough Porter's value chain, all the aspects of its value creation.

This is an exciting and interesting essay to write for a number of reasons. For one it's an honour to make a research on one of the most profitable societies of the world, for second because the kindness of McDonald's employees and the precision of McDonald's Web site, are perfect sources for all kind of information that can help analyse through Porter's value chain, all the aspects of its value creation. In the late 1940s, d**k and Mac McDonalds were searching for a way to improve their little drive-in restaurant in San Bernardino, California, U.S.A.; they invented an entirely new concept based upon speed service, low prices, and big volumes. Word of its success spread quickly, in 1952 they had more than 300 franchising inquires a month from all over the country. McDonald's is now the largest and best-known foodservice retailer and one of the two best-known and powerful brands in the market. With more than 24,500 restaurants in 115 countries, some of those operated by the company, some by franchisees or by affiliates operating under joint-venture agreements. The global market potential is still huge: yet on any day, even as the market leader, McDonald's serves less than one percent of the world's population. The restaurant chain plans to expand their leadership position through convenience, superior value and excellent operations. ...read more.

Also in a large Muslim populations, such as Malaysia a! nd many Middle East countries, their menu is Halal, prepared in keeping with Muslim guidelines. Research indicates that customers feel a unique emotional bond with the chain, the idea of a visit to them triggers a feeling of anticipation and excitement unlike in any other restaurant. Customers come to McDonald's for signature products they can't find anywhere else. In addition many families visit the restaurants because of their unique ability to put smiles on their children's faces. Happy meal combine wholesome food whit a toy; Ronald McDonald is a special friend; play places provide safe and fun recreation and the alliance with Walt Disney Company let the children's shout even more. McDonald's is recognised as one of the best marketers of the world, investing some hundreds of millions of dollars every year for advertising and promotion of its image. In 1967 the franchisees created the Operators National Advertising (OPNAD). Fund by pledging to contribute 1 0f their individual restaurants sales to a national co-operative advertising program in addition to the 2 or 3 % they were contributing to their local advertising-co-operatives. McDonald's has always shown bits of real life in their commercials that seems to have became a standard for them. ...read more.

The Hamburger University even includes a 154-room lodge where students live during training. Given its commitment to uniform standards, the McDonald's System hardly seems to provide room for individual initiative. In fact, one of the least understood characteristic of the system is that its fascination with uniformity exists side by side with its lesser known-but equally strong-respect for creativity and judgement of its franchisees. Without the freedom of franchisees and suppliers to exercise their businessperson instincts, to test their own ideas on new products and procedures, and even to challenge the corporation head-on, McDonald's might still have attained its celebrated uniformity, but a terrible price. It would lose the creativity those divers franchisees and suppliers provide. It would, in short, lose touch with the marketplace. Approximately 800f McDonald's restaurant businesses world-wide are owned and operated by franchisees. Each McDonald's restaurant runs on ! the standard basis given by the big McDonald's headquarters: approximately 2,800 employees provide a wide variety of support functions to the 24,500 McDonald's restaurants through a network of divisional, regional and local-country offices. The chief way to control his restaurant is done in many ways. I think that the most effective way, is the MBWA (The technique of managing by wandering around) to make personal inspection on Q.S.C.& V..This effective technique, done by regular visits is the one most used by McDonald's chiefs to control directly their manager and the other employee's work. ...read more.