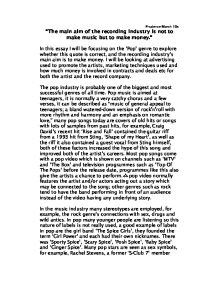 &quot;The main aim of the recording industry is not to make music but to make money.&quot;

Prudence March 10s "The main aim of the recording industry is not to make music but to make money." In this essay I will be focusing on the 'Pop' genre to explore whether this quote is correct, and the recording industry's main aim is to make money. I will be looking at advertising used to promote the artists, marketing techniques used and how much money is involved in contracts and deals etc for both the artist and the record company. The pop industry is probably one of the biggest and most successful genres of all time. Pop music is aimed at teenagers, it is normally a very catchy chorus and a few verses, it can be described as "music of general appeal to teenagers; a bland watered-down version of rock'n'roll with more rhythm and harmony and an emphasis on romantic love," many pop songs today are covers of old hits or songs with lots of samples from past hits, for example, Craig David's recent hit 'Rise and Fall' contained the guitar riff from a 1993 hit from Sting, 'Shape of my Heart', as well as the riff it also contained a guest vocal from Sting himself, both of these factors increased the hype of this song and improved both of the artist's careers. ...read more.

Of course nothing comes for free, and this money must be paid back to the record company eventually through record sales and royalties, this means that most artists don't usually make any money until the third album so they churn them out in quick succession, normally the artist is signed to a three album deal so the record company can at least get what they put into it back out. To produce a song artists come into the studio, most pop artists do not write their own songs so the record company picks one suitable for them out. They sing along to a backing track which has been made by a record producer, a record producer is the person who works at the studio behind the mixing desk; they can do a lot of things to help develop the single into a hit such as improving the quality of the artist's voice. After they have produced their single the artist and the record are advertised. This can include being in pop magazines such as 'Smash Hits', billboard ads, performances on radio shows and leafleting. All these things bring awareness to a potential audience of what this new artist offers and by constant appearances in the media spotlight they are reminded of the release date of the single and the artist, thus improving the chances of them buying the single. ...read more.

Pop artists are constantly hyped up as being 'the next best thing' and the best thing since another artist, if the artist they are being compared to is a favourite of a person, they are more likely to go out and buy that single. Also the age of the record buying public is going down, this means that record companies can influence peoples listening tastes from a younger age ad get them into buying records. The appeal of some bands compared to others depends on what is in fashion at that moment, sales of JLo singles would have gone up at the time when she and Ben Affleck split up. Another thing which influences audiences is what is played most on radio stations, big record companies will pay radio stations to put the song of their artist on a the A-play list. In all I agree with this statement, the music industry, but not as much from independent record labels, is very profit driven. Producers are looking to make a fast buck and constant promotion of the artists seems to be the way it is done. The way that the money must be paid back to a record company also seems to be very money-fuelled, even if the star is no longer popular, the little bit of money they get from royalties etc still has to be paid to the record company, even if they are not signed. ...read more.