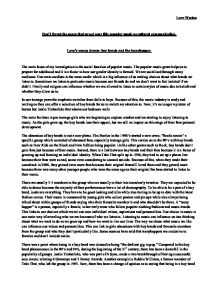 The main focus of my investigation is the social function of popular music. The popular music genre helps us to prepare for adulthood and it is a factor in how our gender identity is formed.

Lara Weston Don't forget the songs that saved your life: popular music as cultural communication. Love's young dream: boy bands and the teenybopper. The main focus of my investigation is the social function of popular music. The popular music genre helps us to prepare for adulthood and it is a factor in how our gender identity is formed. We are socialised through many mediums. One main medium is the mass media which is a big influence of us making choices about what bands we listen to. Sometimes we listen to particular music because our friends do and we don't want to feel isolated if we didn't. Family and religion can influence whether we are allowed to listen to certain styles of music due to beliefs and whether they allow us to. In our teenage years the emphasis switches from dolls to boys. Because of this, the music industry is ready and waiting so they can offer a selection of boy bands for us to switch are attention to. ...read more.

Because of this, when they made their comeback in 2006, they gained even more fans because their original fans still loved them and they gained more because there was many other younger people who were the same age as their original fan base started to listen to their music. There are usually 3-5 members in the group who are usually in their late teens/early twenties. They are expected to be able to dance because the majority of their performances have a lot of choreography. To be able to be a part of a boy band, looks are everything. They have to be good-looking and slim while also having to be up to date with the latest fashion crazes. Their music is consumed by young girls who collect posters and pin ups while also always being talked about within groups of friends saying who their favourite member is and who shouldn't be there. A "teeny bopper" is a person, especially a female, in her early teens who follow popular clothing fashions and music trends. ...read more.

Justin Timberlake, who was part of N Sync, made a rare breakthrough of having a successful solo career, winning 6 Grammys and 2 Emmy Awards. Another example is Robbie Williams, a former member of Take That, who left the group in 1995. Now, there has been a change of opinion as to seeing that being in a boy band isn't as bad as it was seen to be in the early 00's. This is shown because now there has been a rise of boy bands who have successful comebacks. More recent boy bands, such as Jonas Brothers, want to change their image and their sound as they grow up. In a Rolling Stones article, one member said that he wishes he could record a rock album instead of the usual pop song. However, many of these boy bands are manufactured; their fan base is used to the usual style of songs which they already produce. Because of this, if they changed their style, they could lose some fans who liked them due to their original style of music which they were already producing. ...read more.