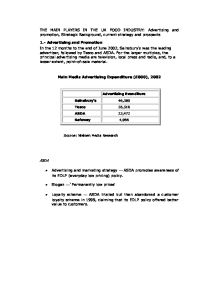 The main players in the food industry - Advertising and promotion, Strategic Background, current strategy and prospects.

* Celebrity- Prunella Scales and Jane Horrocks * Slogan - `Every Little Helps' * Loyalty scheme - Tesco's Clubcard loyalty scheme is the largest in the UK, with 12 million cardholders in May 2002.. 2.- Strategic Background, current strategy and prospects ASDA Group Ltd ASDA Group PLC was taken over by the US retail giant Wal-Mart Stores Incorporated (the world's largest retailer) in 1999. It has developed new store formats (following on from the convenience stores developed by Tesco and Sainsbury's) and has considerably expanded its non-food offering while pursuing an `everyday low pricing' (EDLP) strategy. ASDA looks for new products or services to offer to consumers at a significant discount. ASDA announced in July 2002 the renovation of its entire own-label product range, including non-food products. Safeway PLC The chain was sold to Argyll Group PLC for �681m in 1986. ...read more.

It has only recently moved into non-food products. Sainsbury's is carrying out the refurbishment of its stores and trailing four new store format. The company is planning to revive its Savacentre brand in an attempt to appeal to lower-budget shoppers who have moved to ASDA. Tesco PLC Tesco PLC is now the UK's largest supermarket and hypermarket operator. It continues to pursue a successful growth strategy, based on four key objectives: * maintaining a strong core UK business * becoming strong in non-food sales * continuing the international growth * moving into retailing services (such as online shopping). Tesco has been very successful in implementing its strategy, becoming an international food-retailing group, planning now to expand its supermarket business into Japan and China. Tesco has also been very successful in promoting its range of organic products. UK food and grocery retailing is still the core of Tesco's business, although the company has rapidly expanded its non-food offer and its goal is to double its non-food sales. ...read more.