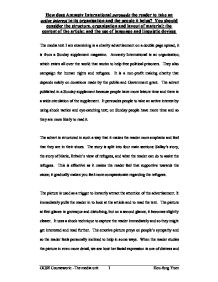 The media text I am examining is a charity advertisement on a double page spread, it is from a Sunday supplement magazine - Amnesty International

The media text I am examining is a charity advertisement on a double page spread, it is from a Sunday supplement magazine. Amnesty International is an organisation, which exists all over the world that works to help free political prisoners. They also campaign for human rights and refugees. It is a non-profit making charity that depends solely on donations made by the public and Government grant. The advert published in a Sunday supplement because people have more leisure time and there is a wide circulation of the supplement. It persuades people to take an active interest by using shock tactics and eye-catching text; on Sunday people have more time and so they are more likely to read it. The advert is structured in such a way that it makes the reader more emphatic and feel that they are in their shoes. The story is split into four main sections: Sallay's story, the story of Marie, Britain's view of refugees, and what the reader can do to assist the refugees. This is effective as it makes the reader feel that supportive towards the cause; it gradually makes you feel more compassionate regarding the refugees. The picture is used as a trigger to instantly attract the attention of the advertisement. ...read more.

Graphic language is used again as a shock factor to emphasise how much grief was caused to an innocent person, for example, "Sallay's hands were severed and tied to her elbows with string." The advertisement again employs the use of personal pronouns like, "we". This makes use feel at fault, so the reader has an enhanced chance they will take an interest in the organisation. Amnesty International brings out how the Westerners feel about refugees (they feel as if the refugees are leeching off us and are too lazy to work) and to portray how they are unwillingly to help; this creates guilt in the reader so they will help. Another linguistic device the advertisement uses is rhetorical devices like, "listen"; it also uses rhetorical questions, like, "Did she ask for her hands to be hacked off?" To emphasise the point that refugees are people just like us and do not wish to be hunted or hurt in any way. The story of a second individual is added because the advertisement wants to show another scenario where innocent people are driven from their homes to become refugees. It uses past tense to show how because of the sequence of uncalled for events; her life will never be the same again. ...read more.

The personal appeal persuades reluctant readers to become actively involved by changing its tone to become softer and steps down from the hard tone to a more pleading tone, this makes the reader change the way they think about the article The subscription coupon is at the end of the article because by this time if you have been convinced, you would have and so there is an ease and speed of access to donate money to them. This helps the reader become active, as all they have to do is to write in the amount that they wish to donate, they do not even have to go and get paper. The article is quite effective as it gradually leads you up to changing your mind, by which point in has an ease and speed of access coupon for you to donate money by. It also uses many techniques that either shock you or plays on your emotions, this persuades you to take an active interest as it is on a Sunday so you have more free time and you feel guilty if you do not help. How does Amnesty International persuade the reader to take an active interest in its organisation and the people it helps? You should consider the structure, organisation and layout of material; the content of the article; and the use of language and linguistic devices GCSE Coursework: -The media unit 1 Hou-fung Yuen ...read more.