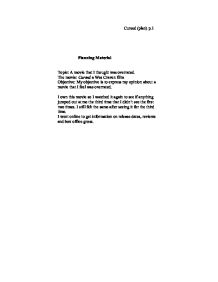 The movie: Cursed a Wes Craven filmObjective: My objective is to express my opinion about a movie that I feel was overrated.

Cursed (plan) p.1 Planning Material Topic: A movie that I thought was overrated. The movie: Cursed a Wes Craven film Objective: My objective is to express my opinion about a movie that I feel was overrated. I own this movie so I watched it again to see if anything jumped out at me the third time that I didn't see the first two times. I still felt the same after seeing it for the third time. I went online to get information on release dates, reviews and box office gross. Cursed (rd.) p.1 Rough Draft Cursed a Wes Craven Film Celita Hamilton January 6, 2006 ENG105 Dr. Christine Miller Cursed (rd) p. 2 Introduction: The movie Cursed was overrated with the use of a well known director and actors, hyped-up commercials and promises of fright. ...read more.

The cast was great I was just really turned off by the whole feel of the movie it was so typical and you knew the culprit before the movie even really got started. In a review by Wireless Magazine they called it "A breathtaking supernatural thriller!"(Video, 2005).In a review by Brian Juergens he states "What we get is just about every clich� imaginable..." (b****y-Distuging, 2005). Conclusion Basically the way I felt about the movie is that it had a good supporting cast and a workable storyline. It failed with the lack of special effects and cheesy punch lines. It seemed more like a modern day B-Movie than a thriller. To put it simple I would rather watch The Rocky Horror Picture Show than watch Cursed. I say give me something to scare me and they give me something that my three year old niece laughs at. ...read more.

That goes to show how outdated the effects seemed. I mean the werewolves were so big they were more funny than scary. The movie trailers and teasers had you believing you would be terrified through the entire movie, I guess that's why they call them teasers. Wireless Magazine called it "A breathtaking supernatural thriller!" (Video, 2005). Cursed (Final) p.3 Brian Juergens stated "What we get is just about every clich� imaginable..." (b****y-Disgusting, 2005). The story line lacked a climax; I mean they practically point out the villain from the start. More or less the way I feel about Cursed is that it had a good supporting cast and a workable storyline that was not used to its full potential. It failed by not delivering what advertisement promised. It had a lack of special effects and cheesy punch lines. It had the feel of a modern day B-Movie. Give me the Howling any day. Cursed (Final) p. ...read more.