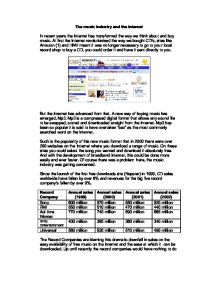 The music industry and the Internet

The music industry and the Internet In recent years the Internet has transformed the way we think about and buy music. At first the Internet revolutionised the way we bought CD's, sites like Amazon (1) and HMV meant it was no longer necessary to go to your local record shop to buy a CD, you could order it and have it sent directly to you. But the Internet has advanced from that. A new way of buying music has emerged, Mp3. Mp3 is a compressed digital format that allows any sound file to be swapped, stored and downloaded straight from the Internet. Mp3 has been so popular it is said to have overtaken "s*x" as the most commonly searched word on the Internet. Such is the popularity of this new music format that in 2000 there were over 200 websites on the Internet where you download a range of music. ...read more.

Up until recently the record companies would have nothing to do with the Internet. Until recently they didn't realise just quite what they were missing out on, the worlds biggest market. How many legal downloads of music from the major record labels were there? Hardly any. Because, until now, for the most part major labels have kept their music off the net. The major record companies' response to piracy wasn't to establish alternative legitimate sites where fans could pay for their music. Instead, they unleashed their lawyers. They attacked the release the of the first portable Mp3 player, the Diamond Rio, claiming it was a device that blatantly encouraged piracy. But they were 'wrong' said a judge, it could also play perfectly legitimate mp3's, freely released as a marketing tool by up and coming bands. The record companies lost and now there are hundreds of mp3 players available. Their next step was to attack the websites themselves. The first attack was on the popular mp3.com. ...read more.

Firstly it will not be in Mp3 format. It will be in a variety of encrypted formats which paying customer's will then only play on their computer. The other major problem with these is that most will not be able to be played on portable mp3 players. For example Sony music downloads will only play on a Sony mp3 player. And Sony products will not play music from other official sources. The advantages to this system will be that the record companies will be able to make available better quality mp3's and with faster download speeds. As the Internet develops it is likely that the record companies will have to involve themselves a lot more. Music will always be available through the Internet, and the record companies are beginning to head in the right direction to do that properly. The debate will rage on, but however you look at it, the way we buy and listen to music is evolving. Now it's all down to whether the record companies can keep up. Footnotes (1) www.amazon.com (2) www.napster.com/ ...read more.