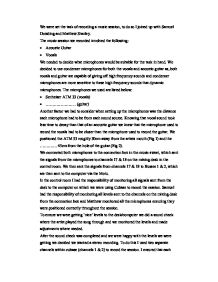 We were set the task of recording a music session, to do so I joined up with Samuel Dowding and Matthew Stanley. The music session we recorded involved the following: * Acoustic Guitar * Vocals We needed to decide what microphones would be suitable for the task in hand. We decided to use condenser microphones for both the vocals and acoustic guitar as, both vocals and guitar are capable of giving off high frequency sounds and condenser microphones are more sensitive to these high frequency sounds that dynamic microphones. The microphones we used are listed below: * Senheiser ATM 33 (vocals) ...read more.

We positioned the ATM 33 roughly 30cm away from the artists mouth (Fig 1) and the ............. 45cm from the hole of the guitar (Fig 2). We connected both microphones to the connection box in the music sweet, which sent the signals from the microphones to channels 17 & 18 on the mixing desk in the control room. We then sent the signals from channels 17 & 18 to Busses 1 & 2, which are then sent to the computer via the Motu. In the control room I had the responsibility of monitoring all signals sent from the desk to the computer on which we were using Cubase to record the session. ...read more.

To do this I used two separate channels within cubase (channels 1 & 2) to record the session. I ensured that each channel was set to mono. After the recording these two separate channels can be combined in the mix down process to create/enhance the stereo effect. Overall I was happy with the recording. If I were to change anything it would have been the artist as I felt his voice was not right for this particular piece and he was somewhat difficult to work with, but time did not allow this. I was happy with the contribution of others in the group and we worked well together as a team. ...read more.