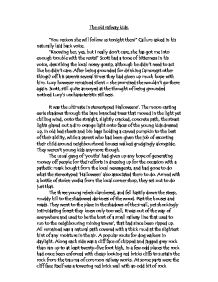 The old railway kids. "You reckon she will follow us tonight then?" Callum asked in his naturally laid back voice. "Knowing her, yes, but I really don't care, she has got me into enough trouble with the rents!" Scott had a tone of bitterness in his voice, describing the local nosey gossip, although he didn't need to act like he didn't care. After being grounded for drinking (amongst other things) off his parents several times they had given up much hope with him. Lucy however remained silent - she promised she wouldn't go there again. Scott, still quite annoyed at the thought of being grounded noticed Lucy's uncharacteristic stillness. It was the ultimate in stereotyped Halloweens'. The moon casting eerie shadows through the bare branched trees that moved in the light yet chilling wind, onto the straight, slightly cracked, concrete path, the street lights glared out a dim orange light onto faces of the young kids dressed up, in old bed sheets and bin bags holding a carved pumpkin to the best of their ability, while a parent who had been given the job of escorting their child around neighbourhood houses walked grudgingly alongside. ...read more.

The teens meeting place; along the hidden path down past the nearest estate that brought them in a small cove in the rock, made when the rock was first blasted away to make room for the railway, now equipped with little log seats and a circle of blackened stones where on several occasions they built a fire as the centrepiece of their drunken nights there. Scott, Callum and Lucy all took their usual seats around the charred ground enclosed by the stones. Callum broke the silence as he piled sum partially dry leaves together and searched for his lighter: "What's up with you tonight?" He asked sounding fairly concerned as he passed the bottle to Scott. Lucy, her arms crossed, shivering with the cold opened her mouth to explain how she promised her parents she wouldn't be where she was. Something stopped her immediately. It was like an icy wind except it was like nothing they've ever experienced anywhere ever before. Whatever it was shot directly through them all sending leaves flying swiftly into an invisible vortex above their heads to the cliff tops. ...read more.

Scott went sliding back down the first few feet of the muddy hill and without effort coughed up what looked like his lungs, in a b****y mess, covering his face, and jacket smearing his hands unconsciously trying to clean himself up, his light brown hair now looked like it had black-red tints in the darkness, that matched his ripped and already mud splattered white trousers that once gleamed in the night. The blood dripped from his face like sweat. He lay unconscious and silent on the foot of the hill. Just over two years later, Lucy sat curled up, hands around her knees, motionless, yet snivelling with nerves. Her music was blearing around her darkened room. The lamp beside her bed at the other end of the room shone a weak yellow light across the floor. But Lucy just sat, as she had done for hours. The same thought was running through her mindless head over and over and over, as she listened to the same repetitive noise. Everything she had worked up to, or rather, from, had miserably gone sliding rapidly back down the same steep, muddy hill.0 ...read more.