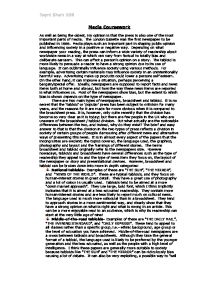 The press in the media.

Media Coursework As well as being the oldest, my opinion is that the press is also one of the most important parts of media. The London Gazette was the first newspaper to be published in 1666. Media plays such an important part in shaping public opinion and influencing society in a positive or negative way. Depending on what newspaper your reading, the press can inform a wide variety of readership about worldwide news in a way at which can vary from factual to totally bias and deliberate sarcasm. This can affect a person's opinion on a story. The tabloid is more likely to persuade a reader to have a strong opinion due to its use of language. It can subliminally influence society using various methods. For example, advertising certain materials may influence society in an unintentionally harmful way. Advertising make up products could lower a persons self esteem. On the other hand, it can improve a situation, perhaps perceiving a bargain/special offer. Ideally, newspapers are supposed to report facts and news items both at home and abroad, but how the way these news items are reported is what influences us. Most of the newspapers show bias, but the extent to which bias is shown depends on the type of newspaper. There are two main types of newspapers, broadsheet and tabloid. It is no secret that the 'tabloid' or 'popular' press has been subject to criticism for many years, and the reasons for it are made far move obvious when it is compared to the broadsheet press. It is, however, only quite recently that the division has become so very clear as it is today; but there are few people in the UK who are unaware of the broadsheet / tabloid division. But what actually are the noticeable differences between the two, and indeed, why do they exist? The brief and easy answer to that is that the division in the two types of press reflects a division in society of certain groups of people clamouring after different news and alternative ways of presenting this news. ...read more.

The caption also writes, "Loser: Wolves boss Dave Jones". Loser, in my opinion, is a strong way of describing an unfortunate loss of victory, but as it's under a darkly toned picture, we get the impression he deserves to be a 'loser'. What did surprise me was that the pictures were not coloured, they were black and white photographs. This immediately gave me the impression that it was not one of the most significant sport stories in the paper, because I noticed the stories behind and in front of this one both contained coloured photographs. There is a main heading at the top of the page, it is very big and bold, like one would expect from a tabloid. The heading is "Thanks a lot, pal". This to me immediately indicated some sort of revenge by the way 'pal' is used after a pause represented by a comma. There is also a sub headline to the left of the page reading, "Wolves boss Jones shown exit door by Marsden". This gives me a stronger feeling of revenge or hatred. This sub heading is also underlined, which I don't think there is an important reason for but it is to ensure the readers do not miss it. Generally, it has the presentational features of a tabloid, (big, bold headlines play with words, large pictures, obvious bias used) apart from the lack of colour used. The layout is similar to a typical tabloid too. It takes up two thirds of a page, and has five short columns, the two side ones which are a little longer than the middle three. I will now analyse the broadsheet paper. I have used the national broadsheet, "FINANCIAL TIMES". I expected this story to be discreetly intervened into the sports section, no picture, and if there is a picture then it will probably be small and black and white. I do not expect much of play on words in the headline or sub heading if there is one. ...read more.

The rest of the four columns are detailed versions of the actually game. The broadsheet uses longer and more complex vocabulary than the tabloid. This does shorten the article as when you're using longer words, they are usually summarising a sentence full of simple words. The tabloid does use quite simple straightforward language; this is more noticeable especially when it is compared with a broadsheet newspaper. The paragraphs are structured according to the change of event. As the broadsheet concentrated more on the actually game, there was a new paragraph every time there was a dramatic change in the game, where as in the tabloid, there was relatively an equal amount on information on the background of Jones, Marsden and the teams. In the tabloid there was a new paragraph practically after every sentence. This symbolises how the tabloid takes leisure/sports news as a more important news item unlike the broadsheet. The tabloid gave this article much more room in the paper than the broadsheet. In both the papers there are five thin columns. They both have written an overall even amount, however they do not have the same ratio of the subjects they talk about. The rough layout of the papers looked like this: (below) Tabloid Broadsheet So my overall opinion on which paper I prefer is the tabloid. This is because of its clever use of language on the headline and sub heading which is to attract the readers; admittedly it did work on me. They also do tend to have more pictures with brighter colours, which keeps the reader interested and gives you an idea of what the story is about before you read it. They use simple vocabulary yet it has more of an effect on you as a reader as it includes sentiment in the writing. Although, the tabloids are all good with giving you all sorts of news but you have to be careful that it's not all exaggerated, sometimes to the extent of which you can safely call it "gossip". Jayni Shah 10R ...read more.