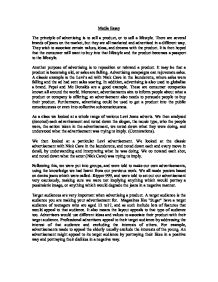 The principle of advertising is to sell a product, or to sell a lifestyle.

Media Essay The principle of advertising is to sell a product, or to sell a lifestyle. There are several brands of jeans on the market, but they are all marketed and advertised in a different way. They wish to associate certain values, ideas, and dreams with the product. It is then hoped that the consumer will want to buy into that lifestyle and the product becomes a passport to the lifestyle. Another purpose of advertising is to reposition or rebrand a product. It may be that a product is becoming old, or sales are falling. Advertising campaigns can rejuvenate sales. A classic example is the Levi's ad with Nick Cave in the launderette, where sales were falling and the ad had sent sales soaring. In addition, advertising is also used to globalise a brand. Pepsi and Mc Donalds are a good example. These are consumer companies known all around the world. Moreover, advertisements aim to inform people about what a product or company is offering; an advertisement also needs to persuade people to buy their product. Furthermore, advertising could be used to get a product into the public consciousness or even into collective subconsciousness. As a class we looked at a whole range of various Levi Jeans adverts. We then analysed (denoted) each advertisement and noted down the slogan, the music type, who the people were, the action taken in the advertisement, we noted down what they were doing, and understood what the advertisement was trying to imply. (Connotations). We then looked at a particular Levi advertisement. We looked at the classic advertisement with Nick Cave in the launderette, and noted down each and every move in detail, by understanding and interpreting what he was doing. We co notated each shot, and noted down what the actor (Nick Cave) was trying to imply. Following this, we were put into groups, and were told to make our own advertisements, using the knowledge we had learnt from our previous work. ...read more.

An example is the advertisement with Nick Cane in the launderette. At the beginning of the advertisement, a blue car passes by. The classic blue car represents the jeans. The car is blue; therefore the jeans are blue. The car is expensive; therefore the jeans are expensive. The car is impressive; therefore the jeans are impressive. Inside the launderette, the colours of the walls are blue. Yet again this represents the jeans. Blue jeans represented rebellion in the 1950s. One thing I noticed was that the men in the advertisements had striking bodies. They were all very hunky and muscular. They were always made to reveal the top half of their body. The fact that these men were well built represents strength and power in the jeans. It shows that they are well developed and well made, just how the muscles are. Levi's main method of appeal was to use handsome men and beautiful women in their advertisements. Attractive people are usually very eye catching, and so every time someone good-looking were to come across the television screen, people would not be able to resist watching the advert, and they would want to watch the advertisement over and over again, just to see those gorgeous people. But during this course of action, these people become brainwashed, the advert is fixed behind the back of their minds, and they want to become stunning young people just like those in the advertisement. They start to think that if they buy the jeans, they will instantly become beautiful people. They begin to worry about their appearance, noticing that there is a great deal of competition in the world. They start dieting if they think they are too fat, they get depressed if they think they are ugly, they become miserable young people who want to be just like those models in the advertisements, but they never accomplish anything. ...read more.