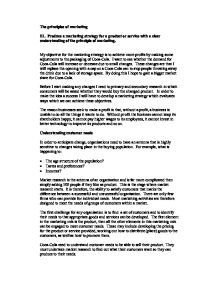 The principles of marketing.

The principles of marketing E1. Produce a marketing strategy for a product or service with a clear understanding of the principle of marketing. My objective for the marketing strategy is to achieve more profits by making some adjustments to the packaging of Coca-Cola. I want to see whether the demand for Coca-Cola will increase or decrease due to small changes. These changes are that I will replace the opening with a cap on a Coca-Cola can to stop people throwing away the drink due to a lack of storage space. By doing this I hope to gain a bigger market share for Coca-Cola. Before I start making any changes I need to primary and secondary research in which consumers will be asked whether they would buy the changed product. In order to make the idea a success I will have to develop a marketing strategy which evaluates ways which we can achieve these objectives. The reason businesses seek to make a profit is that, without a profit, a business is unable to do all the things it wants to do. Without profit the business cannot keep its shareholders happy, it cannot pay higher wages to its employees, it cannot invest in better technology to improve its products and so on. Understanding customer needs In order to anticipate change, organisations need to have an antenna that is highly sensitive to changes taking place in the buying population. For example, what is happening to: * The age structure of the population? * Tastes and preferences? * Incomes? Market research is the antenna of an organisation and is far more complicated then simply asking 100 people if they like as product. This is the stage where market research starts. It is therefore, the ability to satisfy customers that marks the difference between a successful and unsuccessful organisation. There are only few firms who can provide for individual needs. ...read more.

These are the places where consumers go to buy food and drinks. I would put it in specific places where the customer will get attracted to them easily. Examples of these may be point of sale, front entrance. Promotion The type of promotion I will use is persuasive advertising where consumers will be persuaded to buy this product. Firstly I will put it in national newspapers, as they are very popular. I will put it in the tabloid newspapers e.g. the sun as it is read by many readers and if they see the advert, then they will come and get it or spread the word. By looking at the advertising data I can justify why I may use this form of advertising. Many people read national newspapers as the data shows so I thought it would be best to use this. Also the Sun newspapers is the most popular newspaper read as figures show, so therefore I decided to use it. In 1998, �14,307 million was spent on advertising in Britain. It is estimated that in 1995 �750 million was spent on exhibitions in Britain and substantial sums are also spent on sponsorship, sales promotion, mail order and other forms of activity. This is where the money was spent: �M �M Television 4029 - National newspapers 1351 442 Regional newspapers 826 1563 Consumer magazines 553 157 Business and professional journals 756 453 Directories(including yellow pages) - 780 Press production costs 610 - Outdoor and transport 563 - Radio 463 - Cinema 97 - Direct mail 1666 - Examples of newspaper and magazine circulations: Daily newspapers-popular Daily newspapers Daily Express 1,095,716 Daily Mail 2,350,241 The Mirror 2,313,063 The Star 525,734 The Sun 3,730,466 I will also use television adverts as they are persuasive, short and snappy and as a lot of people watch the TV. It is ideal. The adverts will come on repeatedly and it will stay in the consumer's head what the advert was about. ...read more.

11 Spain 12 Germany 21 Central European Division 25 Position Brand name 1 Coca- Cola 2 Fanta 3 Coca- Cola Light 4 Sprite 5 Bonaqua 6 Mezzo This table shows what brand was the number one in Greater Europe. As shown again it was Coca-Cola followed up by Fanta etc. World-wide Unit Case Volume by Region % Africa Group 5 Greater Europe Group 20 North America Group 32 Latin America Group 25 Middle & Far East Group 18 This is showing me how many sales they have in particular. This data is useful as it shows me where Coca-Cola has most of its sales. It also shows me how many sales it has in each country so it shows me how many market shares it has in each country. It is reliable but it is a couple of years olds so the results may have changed and also it is not done by me so I don't know how reliable it is. I can argue this and say that it is reliable as the company has researched it themselves, as they were the ones who sold it. The following data is showing me how much money was spent on advertising in Britain in 1998. This data is shown in the appendices. Looking at this data the most money was spent on television, national newspapers, regional newspapers etc. It also showed me what the advertisement was on e.g. retail and mail order, motors, food etc. This is useful, as it will later on help me decide what form of advertising I should use for my marketing strategy. It suggests to me that I should definitely use newspapers and television, as they are the ones consumers read and see more of. So this will also let me use the statistics to back up what I am going to say. It is reliable, I would use it to decide what advertising I am going to use. It is old but figures like these don't change very often. ...read more.