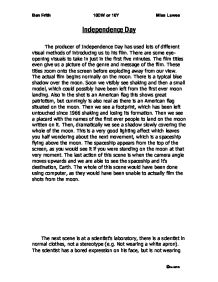 The producer of Independence Day has used lots of different visual methods of introducing us to his film.

Independence Day The producer of Independence Day has used lots of different visual methods of introducing us to his film. There are some eye-opening visuals to take in just in the first five minutes. The film titles even give us a picture of the genre and message of the film. These titles zoom onto the screen before exploding away from our view. The actual film begins normally on the moon. There is a typical blue shadow over the moon. Soon we visibly see shaking and then a small model, which could possibly have been left from the first ever moon landing. Also in the shot is an American flag this shows great patriotism, but cunningly is also real as there is an American flag situated on the moon. ...read more.

The last action of this scene is when the camera angle moves upwards and we are able to see the spaceship and it's destination, Earth. The whole of this scene would have been done using computer, as they would have been unable to actually film the shots from the moon. The next scene is at a scientist's laboratory, there is a scientist in normal clothes, not a stereotype (e.g. Not wearing a white apron). The scientist has a bored expression on his face, but is not wearing any noticeable make-up mainly because they don't need to try and show any realism yet. The scientist is playing a golf putting game that he has set up on the floor. ...read more.

Once again the film is quick to not use stereotypes. This highly important man walks in still wearing his nightwear as he was woken up by his workers phone call. There are some scientists in the background by now, these are wearing scientific clothing and we therefore can immediately classify them as scientists and don't have to wait for the film to audibly tell us. We now see another case of the important man's clumsiness, as he trips over the golf b***s that we saw the scientist playing with earlier. There are a lot of excited faces all around, but for those who are more suppositious we see worried facial expressions. The whole of this scene would have been done in a 3-wall studio. The scene ends and the setting is changed using a white flash as a connector. Ben Frith 10DW or 10Y Miss Lawes (c)benfrith ...read more.