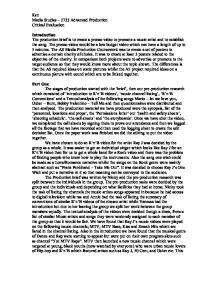 The production brief is to create a promo video to promote a music artist and to establish the song. The promo video would be a low budget video which can have a length of up to 5 minu

Introduction The production brief is to create a promo video to promote a music artist and to establish the song. The promo video would be a low budget video which can have a length of up to 5 minutes. The AS Media Production Coursework was to create a set of posters to advertise a certain charity of choice. It was to create at least 3 posters related to the objective of the charity. In comparison both projects were to advertise or promote to the target audience so that they would know more about the topic shown. The differences is that the AS required ideas on static pictures whilst the A2 project required ideas on a continuous picture with sound which are to be linked together. Part One The stages of production started with the 'brief', then our pre-production research which consisted of 'introduction to R'n'B videos', 'music channel listing', 'R'n'B Conventions' and a Textual analysis of the following songs Mario - let me love you, Usher - Burn, Bobby Valentino - Tell Me and then questionnaires were distributed and then analysed. The production material we have produced were the synopsis, list of the 'personnel, locations and props', the 'Permissions letter' our 'health and safety sheets', 'shooting schedule', 'the call sheets' and 'the storyboards'. Once we have shot the video, we completed the call sheets by signing them to prove our attendance and then we logged all the footage that we have recorded and then used the logging sheet to create the edit decision list. Once the paper work was finished we did the editing to put the video together. We have chosen to do an R'n'B video for the artist Ray J was decided by the group as a whole. ...read more.

There is then a flashback where he is happy with his ex-girlfriend here the video is communicating happiness when he was with the girlfriend and that he is thinking about her. It then cuts back to the present time and then continues in a linear narrative. The sequence where he picks up the phone communicates to the audience that he is going to do something about it and get her back. In the next shot, the girl picks up the phone but through facial expressions, the girl does not want him back. The next scene shows the main actor going to someones house, and finding out the ex-girlfriend has a boyfriend. This follows conventions, as there is a dilemma that the main character has lost. This relates intertextually to Mario-Let me love you as the main character loves the girl, but then loses because she already has a boyfriend but then in the end the girl and the main character are together, communicating that they are in love. After the scene where Ray J finds out the ex-girlfriend has a boyfriend, he goes to a park and get drunk, this communicates realism and representations, as in these situations, there is always drink involved. The narrative then shows Ray J seeing a similar girl to his ex-girlfriend and he runs after her thinking it is her but realises she wasn't. It then shows the girlfriend seeing him and then taking him home and looking after him while he is drunk. After this, he bumps into her on a high street where he expresses his feelings to her, then the scene cuts to choreography as it leaves the audience to think if they eventually get together or not rather then adding it in making it more complex. ...read more.

The video had an average rating of 8 from the target audience and that all of them think our video follows the typical conventions of an R'n'B video although there were responses about the locations being too dark, and the costumes were too casual. All respondents said that the actor/actresses that were featured were appropriate and 9 out of 10 said that the camera shots followed convention. Also 9 out of 10 said the story line is well presented and the same number of respondents said that the editing of the music video was fluent, e.g. keeps with the beat of the song. This shows the overall response was positive but, there is a little room for improvement. Due to the video being low budget, extra equipment would be required such as spot lights to lighten up areas. The main complications with producing the video was time, and that some shots taken were useless due to bad lighting therefore if it was to improve next time, lighting would need to be improved and also time management as the ending of the video was a little bit rushed as we ran out of clips. Also being low budget means that there was very little clothing to choose from therefore we had to do with the clothing the actors were wearing on the day. In the pre-production research, we have found that Ray J's videos appeared in channels such as MTV, MTV Base, Kiss and Smash Hits, and according to the feedback questionnaire, many respondents said that the video would be featured on MTV, MTV Base and Smash Hits. These channels would be the ones we would be recommending the video to be broadcasted on as it is suitable due to the target audience of the video match the target audience of the channel. ?? ?? ?? ?? Ken Media Studies - 2733 Advanced Production Critical Evaluation ...read more.