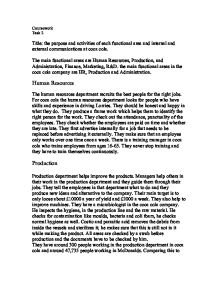 The purpose and activities of each functional area and internal and external communications at coca cola.

Coursework Task 2 Title: the purpose and activities of each functional area and internal and external communications at coca cola. The main functional areas are Human Resources, Production, and Administration, Finance, Marketing, R&D. the main functional areas in the coca cola company are HR, Production and Administration. Human Resources The human resources department recruits the best people for the right jobs. For coca cola the human resources department looks for people who have skills and experience in driving Lorries. They should be honest and happy in what they do. They produce a frame work which helps them to identify the right person for the work. They check out the attendance, punctuality of the employees. They check whether the employees are paid on time and whether they are late. They first advertise internally for a job that needs to be replaced before advertising it externally. They make sure that an employee only works over one time once a week. There is a training manager in coca cola who trains employees from ages 16-65. They never stop training and they have to train themselves continuously. Production Production department helps improve the products. Managers help others in their work in the production department and they guide them through their jobs. They tell the employees in that department what to do and they produce new ideas and alternative to the company. Their main target is to only loose about �10000 a year of yield and �2000 a week. ...read more.

But on the other hand adverts can encourage us to buy things that we don't need because they make the product look or sound really good and a lot of the time the product isn't as good as advertisements make them out to be. Coca cola spent around 569 million into ads in 2002. This shows that they have put a lot of time, money and ideas into the advertisements and they have made their money by the number of drinks they have sold. Coca cola's target audience varies with the different drinks. Fanta is aimed for women and teenagers. Coca-cola classic is aimed for all ages. Diet cola is aimed mostly for women from ages 25-35. This is quite alike with McDonalds because only a certain age people buy a product like women buy salads and a chicken sandwich. Finance HR is the most important functional area to the workers but to the boss its finance. This area controls all money in the business, and they are responsible for all money that goes in and out the business. Every so often the gives the other departments some money and they must stick to that. If they break their budget they must explain why. All money, which is spent, must first go through finance and only a senior worker can give consent for it. They are also responsible for paying every one in the company. ...read more.

This would contaminate the drinks. They communicate face to face or by phone internally. The marketing manager needs to communicate with the finance department to see how much money they have to invest in a making of a product. They communicate by the phone and by fax. The functional areas of coca cola are strong and secure; they help coca cola achieve their aims. They need to communicate with each other for several reasons, whether it's important or just a question about lateness. The advantages of talking, intranet and meetings are that it is efficient and quicker. Using e-mails and phone record involves ICT which can make things complicated and can take time. The business communicates to customers through the website mainly and sometimes through news articles. They sell their products through promotions their latest one is the free music download. If there is a problem then the customers call the customer line. They can complain to the services about the product which then goes to the coca cola administration department. Coca cola is responsible for the product till it reaches the hands of the customer. To do this the company needs to keep in contact with the store or market. They also need to contact about the times they need to deliver new drinks and where the drinks should be kept as well. The company gets their yield ready made so they don't know what it is made of but they put down some basic ingredients like caffeine. ...read more.