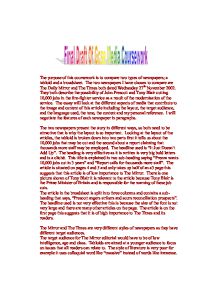 The purpose of this coursework is to compare two types of newspapers; a tabloid and a broadsheet. The two newspapers I have chosen to compare are The Daily Mirror and The Times

The purpose of this coursework is to compare two types of newspapers; a tabloid and a broadsheet. The two newspapers I have chosen to compare are The Daily Mirror and The Times both dated Wednesday 27th November 2002. They both describe the possibility of John Prescott and Tony Blair cutting 10,000 jobs in the fire-fighter service as a result of the modernisation of the service. The essay will look at the different aspects of media that contribute to the image and content of this article including the layout, the target audience, and the language used, the tone, the content and my personal reference. I will negotiate the features of each newspaper in paragraphs. The two newspapers present the story in different ways, so both need to be attractive that is why the layout is so important. Looking at the layout of the articles, the tabloid is broken down into two parts first it tells us about the 10,000 jobs that may be cut and the second about a report claiming that thousands more staff may be employed. The headline used is "It Just Doesn't Add Up". The heading is very effective as it is written is very big bold letters and is a clich�. ...read more.

The Mirror uses no technical jargon as not to confuse their low educated audience. I feel the article in The Times must be aimed at people of higher class and high intelligence because of the complex language used in the article. I feel that the article is aimed at this particular class of people because it ways " remember the recruitment drive in 1970's..." this suggests that the author of the article expects the reader to understand this day in history without much explanation. The words used in the article are understandably complex For Example: Fundamental, Co-ordinated, And Moderate. The sentences are very long averaging about 20 words per sentence. There are two uses of technical jargon in this article. They are "recruitment hump" and "a double-digit" this suggests that the article is aimed for an intelligent person who will understand this term. The tone of the article is used as a way of expressing the piece of news in a particular way. The tone of the article in The Mirror is shocking this is shown by the title saying, "It just doesn't add up". This is extremely relevant to the reported news as it comes as a shock that 10,000 jobs could suddenly be cut. ...read more.

The layouts of both articles are very different. The Mirror has its article on pages 4 and 5 whilst the broadsheet has it on the front page highlighting the deference in importance. The Mirror has a Big Brother exclusive on the first page suggesting the newspaper does not take current affair seriously. Looking at the sub-headings of the articles "Prezza wants 10,000 job cuts in 3 years" and "Prescott angers strikers and sours reconciliation.". The Mirror calls Mr. Prescott "Prezza" which highlights it immaturity. The audience aimed at in both are again completely different. The Mirror is aimed at low class, young and less educated because it uses colloquial words like "massive" people whilst The Times aim for the for intelligent older individuals by using in-depth and formal styles of writing. The language used is again very different in both the tabloid used simple words and short sentences and uses emotive language. Yet again it seems as though the broadsheet uses complex words and longer sentenced. The Mirror uses a shocking tone in the article but The Times uses an informative tone. Both interview similar people indicating that both the articles are relevant to the issue being discussed. I think I would prefer the article from The Mirror this is simply because it uses less complex language and is aimed at people of my class and age. ...read more.