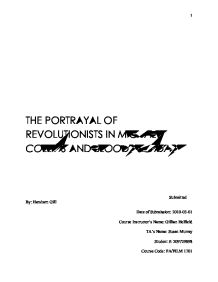 The revolutionists in both Michael Collins and b****y Sunday are depicted as being the underdogs oppressed by the tyranny and might of the British.

This is apparent in the scene where he tells Harry, "I want peace so bad that I could die for it... I do not like to kill, I'd rather do it last and not first". (Michael Collins). Even though the argument could be made that Collins engaged in guerrilla tactics and also contributed towards the partition of Ireland, the film attempts to justify that his ultimate goal still was for Ireland to break free from the shackles of Britain and attain freedom. Thus, the film is convincing in depicting both the viciousness and sensitivity of Collins' nature, turning him into the central figure of an almost-Shakespearean tragedy. Moving forward, in b****y Sunday there is no mythical or romanticized elements like the ones we encountered in Michael Collins. The ominous clouds, lack of sunshine, muddy fields, all represent a break from the past and contribute to a more modern setting. The film details events over a 24 hour period, preceding and following the massacre, thus gives the illusion it is being shot in "real" time as opposed to "reel" time, which is also often distorted (Helfield, Gillian. ...read more.

Still, these acts pale in comparison to the genuine l**t for violence manifest amongst the British soldiers who disobey orders and open fire on the unarmed civilians and at the same time, brag over their exploits. The revolutionist leading the march, Ivan Cooper played by James Nesbitt, is portrayed as a sort of Martin Luther King type figure seeking to advance civil interests through peaceful means. To his chagrin, he is met with force and this is particularly where the film is convincing in its justifications for explaining the causes of both sides. Near the end we see army officials being questioned about the incident with all of their statements being false but still taken as being authentic. Moreover they are lauded as heroes and none of them are reprimanded. Thus, the film b****y Sunday, does a remarkable job in justifying the revolutionists as being peaceful and victims in this case. In the case of the British however, the film seemingly attempts to justify their actions as being driven by a historical hatred and oppression of what it deems as an inferior colony. ?? ?? ?? ?? 1 ...read more.