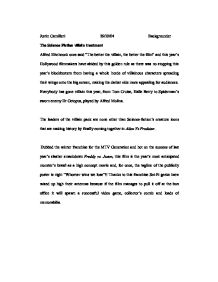 Justin Camilleri 26/10/04 Backgrounder The Science Fiction villain treatment Alfred Hitchcock once said "The better the villain, the better the film" and this year's Hollywood filmmakers have abided by this golden rule as there was no stopping this year's blockbusters from having a whole horde of villainous characters spreading their wings onto the big screen, making the darker side more appealing for audiences. Everybody has gone villain this year, from Tom Cruise, Halle Berry to Spiderman's sworn enemy Dr Octopus, played by Alfred Molina. The leaders of the villain pack are none other than Science-fiction's creature icons that are making history by finally coming together in Alien Vs Predator. Dubbed the winter franchise for the MTV Generation and hot on the success of last year's slasher smackdown Freddy vs. Jason, this film is the year's most anticipated monster's brawl as a high concept movie and, for once, the tagline of the publicity poster is right "Whoever wins we lose"!! Thanks to this franchise Sci-Fi geeks have raised up high their antennas because if the film manages to pull it off at the box office it will spawn a successful video game, collector's comic and loads of memorabilia. Directed by Paul WS Anderson the film was released at local cinemas last Friday and its has mixed reviews with the director seeming always to reference the older films giving the impression that he has not enough original material as his disposal. ...read more.

Thus began the never-ending trail of villains, ranging from Egypt's Pharaohs to Chinese Emperors. One movie era portrayed villains from medieval times like the Vikings and evil knights. Villains on film have evolved devilishly throughout the ages from Nazis to mad scientists, psychopaths, gangsters, people with super human powers and spies. After last summer's August heat wave that contributed to the Terminator blasting out the local box office, the Robot dial has yet again been tuned into the villainous frequency, only this time it is very personal as the battle is set against Will Smith, aka as the Fresh Prince of Bel Air, in I, Robot. Based on the book (also entitled I, Robot) by sci-fi writer Isaac Asimov its theme has become now commonplace: the idea of computers and machines going berserk and taking over the world. There are however, some impressive special effects, such as the scene of the several thousand new robots lined up in a warehouse that recalls a n**i Nuremberg rally. But what stands out in the movie is the villainous Vicki Computer that bears a resemblance to 2001's HAL, and the Robot character Sonny, an advanced robot of considerable intelligence with the innocently inquiring mind of Star Trek's Mr. ...read more.

Such as in Spiderman 2, they have dug deeper into the villain's psychological history. It is true that Dr Octopus played by Alfred Molina threatens Spiderman and the city with giant robotic tentacles but fans take him seriously because he has a reason behind his actions. A lab accident exposed him to radioactivity and in the process he lost his wife and job, turning him into a monstrous criminal. The Ying-Yang formula works well with this villain as an earlier scene establishes him as Peter Parker's friend and later on he tries to save the city from destruction . Leading this summer's villain battle is Tom Cruise who for the first is playing a bad guy in Michael Mann's adult thriller Collateral. The Cruiser puts aside his Samurai armour and plays Vincent, a slicker-than-thou assassin who takes LA Taxi driver Max, played by Jamie Foxx, hostage over the course of a single night, during which he has five hits to carry out, while Mark Ruffalo's dogged cop tries to stop him. Collateral promises dead-eye action and gritty visuals but there are some who doubt whether the great movie-going public will accept Tom Cruise as a bad guy in Collateral but nevertheless it will still be a joy to watch Cruise finally unleash his id, as on screen he has always come close to being the psychotic villain. ...read more.