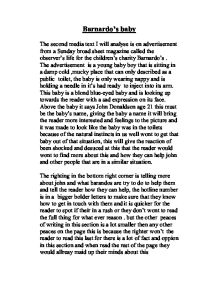 The second media text I will analyse is on advertisement from a Sunday broad sheet magazine called the observer's life for the children's charity Barnardo's .

Barnardo's baby The second media text I will analyse is on advertisement from a Sunday broad sheet magazine called the observer's life for the children's charity Barnardo's . The advertisement is a young baby boy that is sitting in a damp cold ,mucky place that can only described as a public toilet, the baby is only wearing nappy and is holding a needle in it's had ready to inject into its arm. This baby is a blond blue-eyed baby and is looking up towards the reader with a sad expression on its face. Above the baby it says John Donaldson age 21 this must be the baby's name, giving the baby a name it will bring the reader more interested and feelings to the picture and it was made to look like the baby was in ...read more.

but the other peaces of writing in this section is a lot smaller then any other peaces on the page this is because the righter won't the reader to read this last for there is a lot of fact and oppion in this section and when read the rest of the page they would allreay maid up their minds about this advertisement and so they block out the different of fact and oppion. At the top right hand corner is the barnado's logo and slogan which is saying, "giving children back their future" above this the logo is a picture of a family looking happy. This is telling the reader that they wont children to have a happier future, to do this children have to have a joyful childhood and not be abused in any way by their own family. ...read more.

The righter is persuading this kind of person by what they but in the advertisement such as informing the reader about Johns life and why he is like this ,the righter is advertising barnados with the logo in the corer and is persuading us to think about the story of johns life and that the reader can help children that might tern to drugs in the future. Over all I think this is a good peace of advertisement and that suitable for the public because it get the point a cross very cleanly and it won't up set any one with the pictures because it dose say the baby in the picture is a model, because it is shocking and disturbing for the reader to see it well draw the attention to the life's of other people and why the do thing like taking drugs, this will raise money for the charities. ...read more.