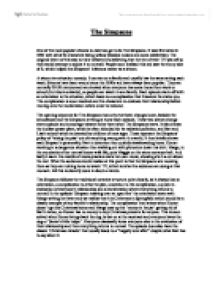 The Simpsons One of the most popular sitcoms to date has got to be The Simpsons. It was first aired in 1991 with all of its characters being yellow (besides Asians and some celebrities). The original intent of this was to trick viewers into believing that the tint of their TV was off so they would attempt to adjust it to no avail. People soon realised this and saw the funny side of it, which helped the Simpsons' infamous career as a sitcom. A sitcom is a situation comedy. It centres on a family and usually has the same setting each week. Sitcoms have been around since the 1950s and have always been popular. They are normally 20-30 minutes and are showed when everyone has come home from work or school (6 o'clock onwards), so people can watch it as a family. Each episode starts off with an orientation to the situation, which leads to a complication that threatens the status quo. ...read more.

In the episode 'Simpson roasting over an open fire' the orientation starts with Marge writing her letter and we realise that it is Christmas in Springfield which should be a classic example of any family's relationship. The complication then arises when Homer doesn't get his Christmas bonus and Marge uses up the 'money in the jar' getting rid of Bart's tattoo, so Homer has no money to buy Christmas presents for anyone. This is soon solved when Homer brings back the dog he bet on at the racetrack and everyone loves the dog or 'Santa's little helper'. Everyone classically loves everyone else in the evaluation of their relationship and then everything returns to normal. The episode does also have the classic 'Christmas miracle' that usually leads to a "happily ever after" despite what Bart has to say about it. Homer fits the role of stereotypical dad quite well as he goes to great lengths to make everyone happy for Christmas with almost no thought for his pride or dignity. ...read more.

For example, she is the only family member that is vegetarian. And lastly, I guess that Maggie was all the stereotypical baby she could be, as she did nothing but get carried around and stay quite. As a whole, the Simpsons are stereotyped like any other family in the same situation would be in another sitcom, except they go about solving their problems differently. It really is a classic situation and even though the ending result is stereotypical, although not exactly predictable (i.e. the dog), the Simpsons make the whole thing enjoyable to watch. The Simpsons are highly stereotyped as 'family in need of help and get Christmas miracle at the last minute' and the ending is pure evidence of this, although nothing like a miracle would ever normally happen. Despite all the stereotypical ending, Matt Groening still managed to add his own touch in the form of Bart chiming in wise cracks after every line of the carol, which would limit the Simpson's stereotypicalism (is that a word?) ever so slightly, even though it happens a lot through the entire episode. (More to come) Victor Stout 10P ...read more.