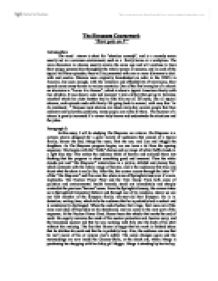 The Simpsons Coursework&quot;Bart gets an F&quot; Introduction: The word sitcom is short for &quot;situation comedy&quot;, and is a comedy series usually

The Simpsons Coursework "Bart gets an F" Introduction: The word sitcom is short for "situation comedy", and is a comedy series usually set in a common environment, such as a family home or a workplace. The main characters in sitcoms usually remain the same age and will continue to have their unique personalities throughout the whole season or seasons, and in each of the typical half-hour episodes, they will be presented with one or more dilemmas to deal with and resolve. Sitcoms were originally broadcasted on radio in the 1950's in America, but soon enough, with the invention and affordability of televisions, they spread across many homes in various countries. One of the first examples of a sitcom on television is "Leave it to Beaver", which is about a typical American family with two children. It was about a cute and innocent 7-year-old boy that got up to harmless mischief which his older brother had to fish him out of. Of curse, like all typical sitcoms, each episode ends with family life going back to normal, with very few "to be continued..." Because most sitcoms are about every-day, normal people that face ordinary and believable problems, many people can relate to them. The humour of a sitcom is greatly increased if a viewer truly knows and understands the situations and the jokes. Paragraph 2: In this essay, I will be studying The Simpsons as a sitcom. ...read more.

Krabappel with his grasp of history and she gives him a D-minus, a grade that Homer is proud to hang on the fridge. The extent to which The Simpsons follows the traditional narrative structure in this episode is arguable. In some ways "Bart gets an F" does follow the traditional narrative structure of a sitcom, because Bart is faced with the complication of the episode: he needs to pass his next test otherwise he will have to retake 4th Grade. He tries to solve this problem in a realistic and believable way by asking a fellow classmate for tutoring lessons. When this doesn't work out Bart continues trying to solve the problem by studying for the test on his own. In the end, we get the resolution, which is Bart passing the test. A typical sitcom works in this way; a complication emerges, the character tries to resolve it, the problem is resolved and everything goes back to normal. However, in some ways, this episode does not follow the typical narrative structure of a sitcom because of unimaginable or unrealistic twists, for example, when Bart prays for divine intervention to give him extra time to study, his prayers are answered and that night, a heavy blanket of snow falls upon Springfield. In the middle of July! All the people of Springfield are merry and give into the "Christmas" spirit. ...read more.

The way that the family unit is presented in this episode definitely shows evidence of the Simpsons being dysfunctional, but as The Simpsons is an animation, this is perfectly alright since animations are expected to bend some rules (e.g. the Simpsons being different from other typical sitcom families). Firstly, the family abandoned Bart on "Snow Day" when they should've stayed home like a typical family and supported him, secondly, Marge doesn't know why Bart is failing all of his classes, and as a mother, she should, and thirdly, Homer and Marge aren't that bothered when they are told that Bart might have to retake 4th Grade, which is something that would never happen in another sitcom family. The Simpsons' dysfunctional ways make them seem less realistic when looked at from a bigger perspective because, sure, a "normal" family can be dysfunctional or weird from time to time, but the Simpsons take this to another level and turn their dysfunctionality into a normal part of their lives. Paragraph 6: In The Simpsons, many devices are used to create humour. Three examples of these are; satire, which, in The Simpsons, is the opposite of what is expected in a typical family (e.g. During "Snow Day" the family left Bart alone and unsupported, whereas a typical family would've stayed with him and helped him out), ?? ?? ?? ?? ...read more.