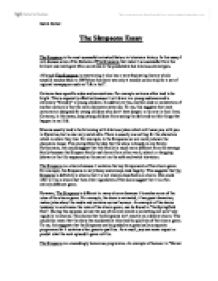 The Simpsons is the most successful animated feature in television history. In this essay I will discuss some of the features of The Simpsons that make it so successful from the brilliant and intelligent Mini-narratives

The Simpsons Essay The Simpsons is the most successful animated feature in television history. In this essay I will discuss some of the features of The Simpsons that make it so successful from the brilliant and intelligent Mini-narratives to the predictable but hilarious stereotypes. Although The Simpsons is entertaining it also has a very fascinating history which actually reaches back to 1987when the show was only a weekly comic strip for a set of regional newspapers such as "life in h**l". Cartoons have specific codes and conventions. For example cartoons often tend to be bright. This is especially effective because it will draw in a young audience and is extremely "friendly" to young children. In addition to this, another code or convention of another cartoon is that the main characters never die. To me, this suggests that most cartoons are designed for young children who don't have despair or sorrow in their lives. Cartoons, in this sense, keep young children from seeing the dark and terrible things that happen in real life. Sitcoms usually tend to be brimming with hilarious jokes which will leave you with you in Hysterics, but is also very watch able. There is usually one setting for the characters which is where they live. For example, in the Simpsons we are mainly shown the characters house. ...read more.

The opening sequence uses satirical jokes. For instance, there is also a ridicule of a science fiction boffin who speaks pseudo-scientific psycho-babble. This suggests that The Simpsons is trying to make us think highly of it by throwing long complex words at us. Furthermore, this could Connote that the creator is trying to humiliate science boffins. One can interpret this as being an example of the growing belief that Science-Fiction Fanatics don't know what they are so enthusing about. Satire is used to link the show, to reality. A Paradigm of this is the joke about the drunken Russian prime minister, Boris Yelksin. This could suggest that The Simpsons is trying to discredit the Russian prime minister by enlarging the fact that he is an alcoholic. A tactic which is often used to great effect by the mass media. This could also mean that the show is just attempting to humiliate a political leader or show us that there are some who are bad role models. To me, this implies that The Simpsons is using this just to make people keep them entertained. Some examples of intertextuality in "The Springfield files" are the reference to the film "speed" and the fact that the show is linked to the "x files" by music, title and subject. ...read more.

The audience also learn a lot about the Simpson family unit in the title sequence. One of the things that we learn is that the Simpsons like to seek comfort by watching television as soon as they finish their daily routines. During the title sequence we are introduced to many of the minor characters for we see chief Wiggam the local police officer shouting at Bart but not stopping him from what he is doing. This suggests that chief Wiggam is unavailing. Many of the minor characters represent common stereotypes in American society. We can observe a stereotype by examining the character of Barney Gumble an alcoholic and a close friend of Homer Simpson. Barney represents most alcoholics in American society. This is shown when Bart skates past him and Barney stands still and burps. Sections of the sequence changes from episode, for instance how the Simpsons get to the sofa an example of this is when the Simpsons use jetpacks to get to the sofa. The creators add these changes in order to keep the viewers focused and entertained while they watch the title sequence so they keep the viewers unenlightened on what will happen in the next title sequence. I believe that the Simpsons will continue to be popular because it appeals to all ages, so the creators know what people of different age groups want to see in a cartoon. ?? ?? ?? ?? Marvin Sinclair ...read more.