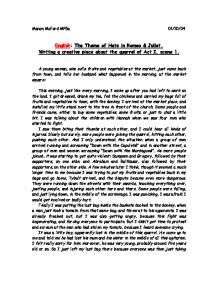 The Theme of Hate in Romeo &amp; Juliet. Writing a creative piece about the quarrel of Act I, scene 1.

Manon Mollard MP5a 01/10/04 English: The Theme of Hate in Romeo & Juliet. Writing a creative piece about the quarrel of Act I, scene 1. A young woman, who sells fruits and vegetables at the market, just came back from town, and tells her husband what happened in the morning, at the market square: This morning, just like every morning, I woke up after you had left to work on the land. I got dressed, drank my tea, fed the chickens and carried my bags full of fruits and vegetables to town, with the donkey. I arrived at the market place, and installed my little stand next to the tree in front of the church. Some people and friends came, either to buy some vegetables, some fruits, or just to chat a little bit. ...read more.

They were running down the streets with their swords, knocking everything over, jostling people, and injuring each other here and there. Some people were falling, and just lying down, in the middle of the scrimmage. I was panicking, I was afraid I would get involved or badly hurt. Finally I was putting the last bag inside the baskets hooked to the donkey, when a man just took a tomato from that same bag, and threw at to his opponents. I was already freaked out, but I was also getting angry, because this fight was degenerating, and forcing everyone to participate. But I didn't get time to protest and scream at the man who had stolen my tomato, because I heard someone crying. It was a little boy, apparently lost in the middle of this quarrel. ...read more.

I also noticed that Lord and Lady Montague and Capulet had arrived. At few metres from the group listening to the Prince, there were some people lying down. I went to see what was going on, together with the boy and the donkey. There were actually wounded people, but luckily no one was very badly hurt. And suddenly, the little boy, still sitting on the donkey, said "There they are!". He had seen his mum and his sister; the girl's knee was bleeding a little bit, but nothing serious. The mother was very happy to see her son again, she thanked me for taking care of him, and we talked a little bit. I had never seen this woman at the market before, but she was really nice. After that, it was time for me to come back; otherwise, you would have started worrying. So I just came home with the donkey, and we are both exhausted now! ...read more.