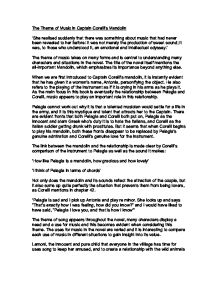 The Theme of Music in Captain Corelli&amp;#146;s Mandolin.

The Theme of Music in Captain Corelli's Mandolin 'She realised suddenly that there was something about music that had never been revealed to her before: it was not merely the production of sweet sound; it was, to those who understood it, an emotional and intellectual odyssey.' The theme of music takes on many forms and is central to understanding many characters and situations in the novel. The title of the novel itself mentions the all-important Mandolin, which emphasizes its importance beyond anything else. When we are first introduced to Captain Corelli's mandolin, it is instantly evident that he has given it a woman's name, Antonia, personifying the object. He also refers to the playing of the instrument as if it is crying in his arms as he plays it. As the main focus in this book is eventually the relationship between Pelagia and Corelli, music appears to play an important role in this relationship. ...read more.

'Pelagia is sad and I pick up Antonia and play re minor. She looks up and says "That's exactly how I was feeling, how did you know?" and I would have liked to have said, "Pelagia I love you, and that is how I know"' The theme of song appears throughout the novel, many characters display a need and a use for music and this becomes evident when considering this theme. The uses for music in the novel are varied and it is interesting to compare each use of music in different situations to gain insight into its value. Lemoni, the innocent and pure child that everyone in the villiage has time for uses song to keep her amused, and to create a relationship with the wild animals she loves so much. It is mentioned that insanity is only acceptable when one is a child, and Lemoni's attempts to teach a stray dog to sing in chapter 9. ...read more.

This element makes it that little bit harder for Carlo and Francesco to kill these men not so different from themselves, but in times of war these feelings are expected to be brushed aside by soldiers. 'There was the sound of singing from the tower, and it seemed they must have been a little drunk' But it is not just the situation of war that brings about song in the characters in the novel, it seems that any chance of celebration, whether it be a small victory, the ringing of the church bells, a tradition or the arrival of an expected miracle requires musical accompaniment of some sort. 'Finally arrived at the point where singing was both natural and inevitable, they sang together a cantada' So from Corelli's gentlemen's singing club, to Lemoni's singing animals, and the composition of Pelagia's march, it is not difficult to identify the importance of music, song and sound in Captain Corelli's Mandolin. ...read more.