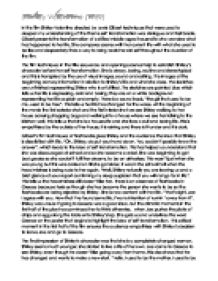 Shirley Valentine (1989) In the film Shirley Valentine directed by Lewis Gilbert techniques that were used to deepen my understanding of the theme self transformation was dialogue and flashbacks. Gilbert presents the transformation of a stifled middle-aged housewife who wonders what has happened to her life. She compares scenes with her current life with what she used to be like and desperately finds a way to bring back her old self throughout the duration of the film. The film techniques in the title sequence and openings scenes help to establish Shirley's character before her self transformation. She is dreary, boring, routine and stereotypical and this is transpired by the use of visual images, sound and editing. ...read more.

Gilbert's film techniques of flashbacks gives Shirley and the audience the idea that Shirley is dissatisfied with life, "Oh, Shirley, do put your hand down. You couldn't possibly know the answer", which leads to the idea of self transformation. This has helped us understand that she was discouraged at school and so she became a rebel. She was beginning to get bad grades so she couldn't fulfil her dreams, to be an airhostess. This wasn't just when she was young but this was carried on till she got older. It was in the school hall when the head mistress is being rude to her again. "Well, Shirley naturally you are leaving us and a brief glance at your report confirming my deep suspicion that you will not go far in life". ...read more.

She gets us and underlines the word Greece on the poster that begins to highlight the idea of self transformation. This critical moment in the first half of the film ensures the audience empathises with Shirley's decision to leave Joe and go to Greece. The final impression of Shirley's character was that she is a completely changed woman. Shirley seems much younger; she started to live a life of her own. Joe came to Greece to see Shirley, even though he doesn't like going away from home, this also shows that he has changed and wants to make a new start. "Hello. I used to be the mother. I used to be the wife. But now I'm Shirley valentine again". This is the final scene that recognises that her self transformation into a new woman who is enthusiastic about life ambitions. ...read more.