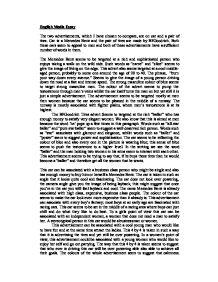 The two advertisements, which I have chosen to compare, are on car and a pair of tires.

English Media Essay The two advertisements, which I have chosen to compare, are on car and a pair of tires. Car is a Mercedes Benz and the pair of tires are made by BFGoodrich. Both these cars seem to appeal to men and both of these advertisements have a sufficient number of words in them. The Mercedes Benz seems to be targeted at a rich and sophisticated person who enjoys taking a walk on the wild side. Such words as "carve" and "slice" seems to give the image of living on the edge. This advert also seems targeted at a cool middle-aged person, probably to some one around the age of 20 to 40. The phrase, "burn your way down every avenue." Seems to give the image of a young person driving down the road at a fast and intense speed. The strong masculine colour of blue seems to target strong masculine men. ...read more.

The car is taken in such an angle that it looks quite cool and fascinating. The car does not look over powering, the camera angle give you the image of being layback, this might suggest that once you're in the car you will feel layback and cool. The name Mercedes Benz is already associated with high class, expensive, business class people. The colour of the car seems to make the car look even more expensive than it already is. This advertisement can associate with every boy's fantasy; most boys at an early age are fascinated with racing cars. This car seems to be set in the middle of a racing area where boys can just chill and do what they like to do best. To a girls point of view this car can be associated with an independent women, a women that does not need a man to satisfy her. A stereotypical person in this car would be a businessman or women. ...read more.

Sharp can also mean sharp and smart looking. The word butter gives the image of being slick this also gives the image of a person driving down the road in their new slick Mercedes Benz. The phrase "you'll look good in it too" gives the impression that the car is good looking so in conclusion would make you look good as well. The Mercedes Benz logo is actually quite simple, it only has two colours and it is not big but yet still in stands out. The symbol in the middle of the logo is a three-pointed star this relates to being absolutely perfect and also total peace. The style of words in the BFGoodrich Tires advertisement is quite formal. There are hardly any words in this advertisement, which could be considered as slang. Although the picture in this advertisement might suggest that these tires are for young people, the wording might suggest that this tires are also for people who are serious with there life. The word "leap" means big jump, this might suggest that if you buy these tires you would be going for the jump of you life. ...read more.