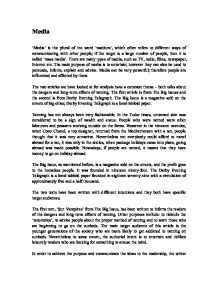 The two articles we have looked at for analysis have a common theme - both talks about the dangers and long-term effects of tanning. The first article is from The Big Issues and the second is from Derby Evening Telegraph

Media 'Media' is the plural of the word 'medium', which often refers to different ways of communicating with other people; if the target is a large number of people, then it is called 'mass media'. There are many types of media, such as TV, radio, films, newspaper, Internet etc. The main purpose of media is to entertain; however they can also be used to persuade, inform, explain and advice. Media can be very powerful; therefore people are influenced and affected by them. The two articles we have looked at for analysis have a common theme - both talks about the dangers and long-term effects of tanning. The first article is from The Big Issues and the second is from Derby Evening Telegraph. The Big Issue is a magazine sold on the streets of big cities; Derby Evening Telegraph is a local tabloid paper. Tanning has not always been very fashionable. In the Tudor times, untanned skin was considered to be a sign of wealth and status. People who were tanned were often labourers and peasants working outside on the farms. However in the nineteen twenties, when Coco Chanel, a top designer, returned from the Mediterranean with a tan, people thought that it was very attractive. Nevertheless not everybody could afford to travel abroad for a tan, it was only in the sixties, when package holidays came into place, going abroad was made possible. Nowadays, if people are tanned, it means that they have money to go on holiday abroad. The Big Issue, as mentioned before, is a magazine sold on the streets, and the profit goes to the homeless people. It was founded in nineteen ninety-four. The Derby Evening Telegraph is a local tabloid paper founded in eighteen seventy-nine with a circulation of approximately five and a half thousand. The two texts have been written with different intentions and they both have specific target audiences. ...read more.

The writer expresses her caustic views on tanorexics with deliberation. Normal people should be startled by the 'unnervingly' looking tanning booths that exhibit so many similarities with coffins; tanorexics on the other hand don't mind the alarming shape of the tanning booths. Williams seems to implicate that tanorexics and businessmen come in a pair: one is willing to give all they got to get brown skin, whilst the other is willing to take whatever's on offer to give others tans. This has connotations of stupidity, single-mindedness and lunacy. A second anecdote is included, this time about an accountant Victoria Williams, who is addicted to suntanning. Another personal experience prevents the reader from feeling attached from the article, and make sure that their eyes stick to the text like a magnet. The idea of drug addiction is reinforced; Victoria professes that going on sunbeds 'makes her feel healthier', which is exactly what Jane Horwood said earlier on in the article. The writer wants the message to reach the target audience's brains and reside there: using sunbeds is like drug addiction. It's clear that Cayte Williams doesn't even want the readers to try a sunbed session to learn what it feels like, because they will get hooked. Victoria is an ideal example. She only started to use sunbeds 'to clear up a skin complaint', but now she's indulging herself in these coffin-like booths regularly, and she has lost her self-control; her attempt to quit has failed, because she gets 'miserable' and becomes 'pasty' soon after. Unlike the case with Jane Horwood, the writer doesn't want the reader sympathise Victoria, simply because she appears childish, ignorant and selfish. She somewhat answers the rhetorical question, 'Is she worried about the latest sunbed scare?' in the interview; she does not accept the truth about the dangers of using the sunbeds, rather she thinks that they are 'over-hyped'. In the readers' minds, she is arrogant and utterly immature. ...read more.

In the D.E.T article, the photograph of the woman appears plain at first, however when the reader take a closer look at her, a sense of mystery is felt; the readers cannot tell exactly what she's thinking, or work out why she looks so distant. Only when they read the caption do they realise that she let herself be seized by skin cancer. The style of writing mirrors the main purpose: to inform. The detailed account of Lynne Dickens' experience describes every aspect of 'her painful battle with the disease.' The woman doesn't look like an exotic traveller or a glamorous celebrity. She looks quite down-to-earth. For this reason, the readers may intend to find out more, and let their curiosities lead them into reading the main story. Instead of choosing a famous personality, the writer decided to report about a local woman. The connotations are the reader would feet that the problem is not far, but very close to home, thus they must pay attention to the article and take precautions. The emotive language in the article reaches deeply into the readers' hearts and arouses strong emotions for the subject: 'lifelong reminder', 'regrets', and 'I don't think it'll ever go away.' These phrases guide the reader to feel empathy with Lynne, thus understand her position better. It is easier for the reader to see the message and purpose of the text clearly if only one story has to be followed. They only need to focus on Lynne, and with her the distressful experience. This ensures that the reader wouldn't be sidetracked. From the evidence I've seen, I think that the 'Sun Vampires' stand out more between the two, because the writer has wittily turned a weighty issue into an rather enjoyable, light-hearted read. The words are bittersweet; on the one hand, addiction to sunbeds is serious and could be lethal; on the other hand, the writer ornaments the whole experience to make it seem as if the 'tanorexics' are foolishly throwing themselves in coffins - which might eventually kill them - and balances the grisly matter. ...read more.