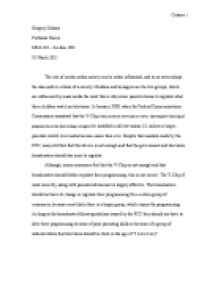 The V-chip and Parental Control of Children's TV Viewing.

﻿Calame Gregory Calame Professor Harris MCA 101 ? Section 1FG 10 March 2011 The role of media within society can be rather influential, and to an extent shape the idea and/ or actions of a society. Children and teenagers are the two groups, which are influenced by mass media the most this is why some parents choose to regulate what there children watch on television. In January 2000, when the Federal Communications Commission mandated that the V-Chip (term used for television receivers allowing the blocking of programs based on their ratings category) ...read more.

The V-Chip if used correctly, along with parental advisement is largely effective. The broadcasters should not have to change or regulate their programming for a certain group of consumers, because most likely there is a larger group, which enjoys the programming. As long as the broadcaster follows guidelines issued by the FCC they should not have to alter there programming because of poor parenting skills or because of a group of radicals whom feel television should be stuck in the age of ?I Love Lucy?. The main question many consumers have regarding the V-Chip is how effective is this product and should it be extended to other forms of rated media. ...read more.

Due to the V-Chip being unable to regulate live broadcast, it is impossible to establish control over live television. If a parent choose for there children to not watch certain live broadcast, they can use the back up controls provided by the cable company if they have cable, in case a family does not have cable parental advisement is the only back up. In conclusion the V-Chip is a device that largely helps regulate for parenting but like any device it is not free of faults therefore the best possible way to regulate is parental regulation, known as teaching your children right from wrong and letting them know what is appropriate for them to watch and not to watch. ...read more.