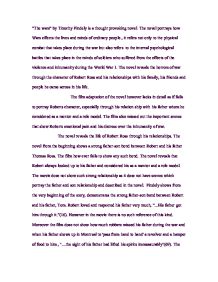 &quot;The wars&quot; by Timothy Findely is a thought provoking novel.

"The wars" by Timothy Findely is a thought provoking novel. The novel portrays how Wars effects the lives and minds of ordinary people , it refers not only to the physical combat that takes place during the war but also refers to the internal psychological battles that takes place in the minds of soldiers who suffered from the effects of the violence and inhumanity during the World War 1. The novel reveals the horrors of war through the character of Robert Ross and his relationships with his family, his friends and people he came across in his life. The film adaptation of the novel however lacks in detail as if fails to portray Roberts character, especially through his relation ship with his father whom he considered as a mentor and a role model. The film also missed out the important scenes that show Roberts emotional pain and his distress over the inhumanity of war. The novel reveals the life of Robert Ross through his relationships. ...read more.

The film adaptation of the novel did a very poor job in showing a proper Roberts relationship with is father because of which we never saw an important side of Roberts character. The film also failed to portray a concrete image of Robert in his state of emotional distress and pain. The movie for example did not show how Roberts isolated his self during his training in Alberta. The novel reveals that after his sister's death Robert shunned all kinds of attachments and kept to himself, this is very effectively shown during his training at lethbridge, Alberta "he wanted no attachments" (28). The movie dose not contains any such scene or any reference to his seclusion, thus leaving out an important part of the novel as it showed how to what extent Rowena's death affected him and how he was dealing with his loss. Also, this is the part of the book where Robert is away from home, alone for the first time and this is directly after Rowena's death. ...read more.

The movie also fails to show Roberts fragile state in of mind as when he comes across Eugene Taffler during his lousetown experience. This part although included in the movie failed at its purpose to show Roberts fragile state of mind and his loss of innocence. It did not include the scene where Robert sees Eugene Tafflers different and dark personality and thus did not show his of anger and disappointment as he considered Eugene as role model and wanted to follow his footsteps. The movie did succeed in showing the effects of war over people and suffering it caused. It showed how the soldiers were treated and under what conditions they fought. Nevertheless, it failed to show how the wars affect their state of mind. The novel expressed this part every effectively and was very clear in showing what went through their (soldiers) mind and how they reacted when they faced the reality of War. The movie did not contain any reference this part of the novel, thus failed in its primary objective to show the reality of War and the suffering caused by it. ...read more.