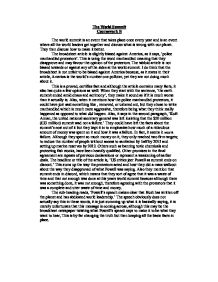 The world summit is an event that takes place once every year and is an event where all the world leaders get together and discuss what is wrong with our planet. They then discuss how to make it better.

The World Summit Coursework B The world summit is an event that takes place once every year and is an event where all the world leaders get together and discuss what is wrong with our planet. They then discuss how to make it better. The broadsheet article is slightly biased against America, as it says, 'police manhandled protestors'. This is using the word manhandled meaning that they disapprove and may favour the opinion of the protestors. The tabloid article is not biased towards or against any of the sides at the world summit. I do think that the broadsheet is not unfair to be biased against America because, as it states in their article, America is the world's number one polluter, yet they are not doing much about it. ...read more.

Also, it says in the second paragraph, 'Kofi Annan, the united national secretary general was left insisting that the $50 million (�33 million) summit wad not a failure.' They could have left the facts about the summit's cost out of it but they kept it in to emphasize how much of a ridiculous amount of money was spent on it and how it was a failure. In fact, it seems it was a failure. Although they spent so much money on it, they only reached two firm targets; to reduce the number of people without access to sanitation by half by 2015 and setting up marine reserves by 2012. Others such as banning toxic chemicals and protecting fish stocks, have been heavily qualified. ...read more.

Also they mention that summit ends in discord, which means that they sort of agree that it was a waste of time and that not enough was done at this years world summit because although there was something done, it was not enough, therefore agreeing with the protestors that it was a complete and utter waste of time and money. The sub-heading reads, 'Powell's speech makes clear that Bush has written off the planet and has abdicated world leadership.' The speech obviously does not actually say this in these words, it is just summing up what it is basically saying, it is merely unfortunate that this message is coming across, although this may be the broadsheet newspaper twisting what Powell's speech says to make it to be what they want to hear, This is by far changing the truth but then keeping all the basic facts in place. ...read more.