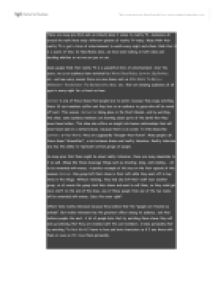 There are many pro (for) and con (cheat) when it comes to reality TV. Audiences all around the world have many different opinions of reality TV today. Many think that reality TV is just a form of entertainment to watch every night and others think that it is a waste of time. In New Media class, we have been looking at both sides and deciding whether or not we are pro or con. Some people think that reality TV is a wonderful form of entertainment. Over the years, we as an audience have watched Real World, Road Rules, Survivor, Big Brother, etc. and now every season there are new shows such as Who Wants To Marry a Millionare?, The Bachelor, The Bachelorette, Mole, etc. that are drawing audiences of all ages in every night for at least an hour. Survivor is one of those shows that people love to watch, because they enjoy watching these 16 cast members suffer and they love as an audience to guess who will be voted off next. ...read more.

As shown in an article with statistics about these television shows, reality television is viewed mainly by females and males ages 12-19. These shows have a humongous impact on their viewers. Many girls especially look at reality TV and they look at the females on the show. They decide that they want to look like them, be like them but that impact isn't always from reality TV, it's also from the media in general. This is because audiences form emotional attachments (as mentioned earlier) to the characters on the show. As you can see, reality television has a huge impact on people all over. By looking at all of these reality TV shows in class and at home, I have learned a lot about the industry of television and how the producers think when they are making their decisions on what to air on television for audiences. Right now I can only help but think, what would our world be like if we didn't have reality television, because it's true. ...read more.

What's bad about TV * It stifles creativity. Kids who watch too much TV are less able to use their own mind to create something out of nothing, says Jane Healy, PhD, author of Endangered Minds: Why Children Don't Think -- and What We Can Do About It. When they play make-believe, the play tends to be based on their favorite shows. * It inhibits (slow down/ reduce) language development. Even the better shows rely on visuals at the expense of talk, says Healy. When kids start school, they're expected to pay attention and process information without the benefit of dancing Muppets. Kids who are used to TV may have a hard time making the transition. * TV is addictive. The average American child watches three hours a day of TV. Time spent watching TV is time robbed from other important activities like reading, make-believe play, and interacting with parents. * The things kids learn on TV do not translate into academic success. Frank Vespe, executive director of the TV Turn Off Network, points out that according to a study conducted by the National Association of Educational Programs, kids who watched the least TV did the best on standardized tests in fourth grade. ...read more.