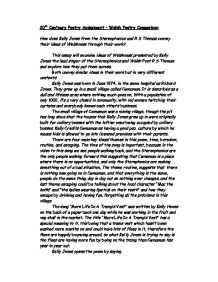 This essay will examine ideas of Welshness presented by Kelly Jones the lead singer of the Stereophonics and Welsh Poet R S Thomas and explore how they put them across.

20th Centaury Poetry Assignment - Welsh Poetry Comparison How does Kelly Jones from the Stereophonics and R S Thomas convey their ideas of Welshness through their work? This essay will examine ideas of Welshness presented by Kelly Jones the lead singer of the Stereophonics and Welsh Poet R S Thomas and explore how they put them across. Both convey similar ideas in their work but in very different contexts Kelly Jones was born in June 1974, in the same hospital as Richard Jones. They grew up in a small village called Cwmaman. It is describes as a dull and lifeless area where nothing much goes on. With a population of only 1000, it's a very closed in community, with old women twitching their curtains and everybody knows each other's business. The small village of Cwmaman was a mining village, though the pit has long since shut the houses that Kelly Jones grew up in were originally built for colliery bosses with the loftier ones being occupied by colliery bosses. Kelly Credits Cwmaman as having a good pub culture by which he means kids is allowed to go into licensed premises with their parents. ...read more.

are being so fussy, stopping him from closing his stall, coning about the price of goods, so he yells at them and says go down there to shop. We can sympathise because he has been working all day and is probably tired of boredom. "Closing down, closing down another road One-way system steals the show" Closing down, closing down another road could mean that they are closing down another road of their life, they are running out of alternatives just like if you were in a car going down a one way street you have no where to go but if you have a normal road you can go up and down it, one way system steals the show, this could be the equivalent to their lives, meaning that there is no future what so ever in Cwmaman, and they that the people are doing nothing about it. "Mac the knife swings a can And sings the day away" These sentences could mean that this local character Mac the Knife is trying to escape from boredom by drinking and trying to drown his sorrows, and singing the day away could seem like good entertainment for him because he doesn't know what he is doing. ...read more.

Kelly Jones' aim was not to show the readers/listeners that Wales is a boring place to live, but to say that there is nothing to do in Cwmaman. The tone of this poem was mainly sad "I get camping eyes in the final hour" he's getting tired of work and stressed over what he is doing, the song if very negative "there's more life more life more life in a tramps vest" if you are saying that there is more life in a tramp that goes around smelling all day long then things must be very bad! This song shows some signs of Kelly Jones getting frustrated "I loose my rag and tell them take your bag and shop down there" if he is saying this to a customer, he must be very angry because he is telling somebody to go and shop somewhere else instead of coming to his stall to shop. The pace of this poem seems to speed up as they get closer to the main chorus, probably because they are trying to let of some steam and have some fun. Over all Kelly Jones makes welsh life in Cwmaman look dull, lifeless and boarding, he is continually negative about Cwmaman in the song and it seems that this mining village is going no where fast! ...read more.