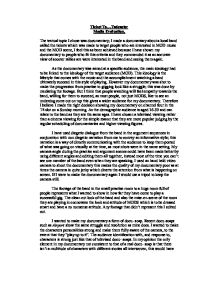 Ticket To...Tadcaster Media Evaluation. The textual topic I chose was documentary; I made a documentary about a local band called the tickets which was made to target people who are interested in MOD music and the MOD scene, I feel this as been achieved because I have shown my documentary to people who fit this criteria and they commended it as an accurate view of scooter rallies are were interested in the band and seeing them again. As the documentary was aimed at a specific audience, the main ideology had to be linked to the ideology of the target audience (MOD). This ideology is the lifestyle that comes with the music and the accomplishment watching a band ultimately succeed in this style of playing. However my documentary was shot to make the progression from practise to gigging look like a struggle; this was done by mediating the footage. But I think that people watching will feel empathy towards the band, willing for them to succeed, as most people, not just MODS, like to see an underdog come out on top this gives a wider audience for my documentary. ...read more.

I wanted to make my documentary a form of docu- soap. Recent docu-soaps such as Airport show the same struggle and resolution as mine does. I wanted to make the characters personalities strong and make them fully aware of the camera, to the extent that they "play up to it". The audience identification with, and response to, characters is strong just like that of televised docu- soaps. In my opinion the only element in my documentary not consistent to that of a real docu- soap is that there isn't a multitude of characters with different stories all interwoven, this would have been difficult to do as the point of my documentary was to show one story from a certain group of people. At the end of my documentary it fades out with a still frame of the bands faces smiling with a song played over the top this makes people want to know what will happen to the band after they had pulled off such a big gig, I wanted people to ask questions like Will they do any more? What will happen to them now? ...read more.

Using this institution would also ensure the money needed to professionally film and edit, a large budget isn't needed as big name stars are non existent and not needed in a documentary. The bands ideology is the same a*s that of the audience, have a laugh and enjoying themselves whilst still maintaining quality and seriousness but most of all doing it for themselves. The bands ideology fits in well with the ideology of channel 4; the channel on which the documentary would feature. The Public Service charter means that the documentary would be shown to people of minority interests, such as that of a MOD. More specifically the programme would be best scheduled during the T4 slot on a Sunday morning as to target the audience more specifically. With the reputation of music channels such as MTV rising bands are becoming more popular and so in turn documentaries such as "Making the Band" are too spurring more people on to create their own band. My documentary was made to inspire people of the same age of the band showing the audience the highs and the lows and what was needed to create their own band aspiring to be like The Tickets; this I believe is a new trend within teenage boys and my documentary meets this trend. ...read more.