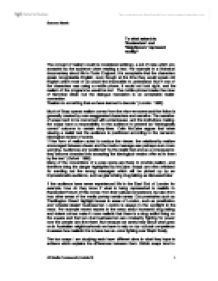 To what extent do 'Eastenders' and 'Neighbours' represent reality? The concept of realism could be considered arbitrary, a set of rules which are accepted by the audience when reading a text. For example in a historical documentary about life in Tudor England, it is acceptable that the characters speak recognisable English, even though at the time they would speak old English which most of us would find impossible to understand. But if one of the characters was using a mobile phone, it would not look right, and the realism of the programme would be lost. The mobile phone breaks the rules of historical detail, but the dialogue translation is an acceptable realist convention. 'Realism is something that we have learned to decode.' (London: 1996) Much of Soap operas realism comes from the mise-en-scene and the fiction is generally created by over exaggerated characters and narrative. The narrative of soaps tend to be concerned with social issues, and the institutions making the soaps have a responsibility to the audience to present an 'ideologically correct' outcome to certain story-lines. Colin McCabe argues that when viewing a realist text the audience is positioned according to the camera's ideological version of events. 'If the form of realism acted to seduce the viewer, the relationship realism encouraged between viewer and the media message was perhaps even more worrying. Audiences are 'positioned' by the realist text and as a consequence they become stranded into accepting the ideological version offered to them by the text.' (Oxford: 1999) Many of the conventions of a soap opera are there to provide realism, and therefore bring the danger highlighted by McCabe. Soaps are often criticised for sending out the wrong messages which will be picked up by an impressionable audience, such as glamorising drug talking as discussed later. If the audience have never experienced life in the East End of London for example, how do they know if what is being represented is realistic in Eastenders? ...read more.

reality of Christmas day which has been represented more realistically in the BBC comedy 'The Royale Family', where the family are shown watching the repeats on television whilst eating cold turkey sandwiches. Another important area which adds to the realism of soaps is the mise-en-scene. The Kennedy house includes all the props you would find in an everyday house including a portrait of the three children, all of whom have left home. Regular viewers of the soap will know that this was painted by Helen Daniels, one of the original cast members who had to be written out because of ill health in real life. This portrait adds depth to the characters because it gives them a past. Because the episode switches from the Rodeo to Ramsey Street, establishing shots are used frequently to make sure the audience knows where the scene is taking place. The Rodeo is unfamiliar to the audience so there are a string of establishing shots to introduce the audience to the setting of that scene, therefore not alienating potential new audiences. This episode of Neighbours is unusual because it is half filmed off location. Soaps are generally cheap to produce because they use the same sets over and over and they stick to the same locations. This allows the audience to become familiar with the habitat of the characters and feel that they are a part of their community. So everyone who watches is familiar with the Caf� and Lou's Place. The two soaps I have studied focus on different areas of society. Neighbours concentrates on middle class families whereas Eastenders is more about working class people. In both episodes the characters have money troubles, reflecting a common occurrence in real life. But there is a big difference. In Neighbours Drew and Libby have lent Scottie some money and they are worried that he won't be able to pay them back. ...read more.

Emmerdale and Crossroads for example are sponsored by soap powder companies which shows that in a sense soaps have come full circle from when they started. This shows that the institutions involved in the production of the soap and the advertising have been reassured that their original target of bored housewives are still tuning in. But there is a newer audience that soaps are attracting. When Neighbours was first broadcast in Britain, there was a panic because children began turning up late to lessons because they had been watching their favourite soap in their dinner hour. The scheduling of soaps is therefore very important. The producers of neighbours realised that if they broadcasted at tea-time when the whole family were at home they could increase their viewing figures, which they did, making it the second popular programme on the BBC after Eastenders. The scheduling of the two soaps helps to explain why they have such different audiences. Neighbours is on at a time when many children are just coming home from school and are likely to watch the television to wind down. Because many storylines are about teenagers this also helps to explain why a large proportion of the audience are teenagers. In conclusion Eastenders appears to be more realistic than Neighbours, but both soaps contain realistic and fictional elements. The scheduling and aims of the producers of Neighbours explain the more humorous approach to the genre while the nature and principals of the BBC and of British soaps as a whole, give some explanation to the more 'gritty' approach. Looking at soaps on the surface, they do not seem to be very realistic at all, but a closer study proves that their success to some extent relies on the audience being able to relate to the characters' lives, which must therefore be realistic to be believable. At the end of the day they are meant to be fictional and they are not trying to be like documentaries, but their balance between the realistic sets and setting and the over exaggerated narratives and characters is what makes the genre so successful. ...read more.