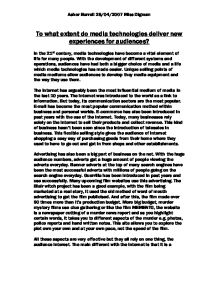 To what extent do media technologies deliver new experiences for audiences?

To what extent do media technologies deliver new experiences for audiences? In the 21st century, media technologies have become a vital element of life for many people. With the development of different systems and operations, audiences have had both a bigger choice of media and a life which media technologies has made easier. Unique selling points of media mediums allow audiences to develop they media equipment and the way they use them. The Internet has arguably been the most influential medium of media in the last 10 years. The Internet was introduced to the world as a link to information. But today, its communication sectors are the most popular. E-mail has become the most popular communication method within business and personal worlds. E-commerce has also been introduced in past years with the use of the Internet. Today, many businesses rely solely on the Internet to sell their products and collect revenue. This kind of business hasn't been seen since the introduction of telesales in business. This flexible selling style gives the audience of Internet shopping a easy way of purchasing goods from their home where they used to have to go out and get in from shops and other establishments. Advertising has also been a big part of business on the net. ...read more.

Being able to communicate with different people in a 'real time' situation is the selling point of the Internet. Audiences are now able to do what people have wished for many years. To be able to do tasks such as shopping, paying bills and handling finances without having to go and deal with people. This aspect has produced an experience that many people thought impossible into further in time. Computer games rely on a niche marketing strategy. The whole point of computer games and consoles is selling products with short lifecycles for high prices. This means that the market is very fast moving and continuous. As one console is released the same company are in the final stages of developing their new console. Computer games are very different and yet very similar. The genre of games can range from fantasy platform to imitation sports to Role playing games. The whole point of this is the niche market. The games are all different and are aimed at different age groups and genders. For example, a spice girls spin off game is aimed at girls aged 14 and under whereas FIFA 2002 is aimed at men aged 15 to 25. The whole point is to let the audience experience what they want and enjoy the type of situation they feel they would like. ...read more.

Like the telephone, you can talk to someone as if you were speaking to them face to face, only you can be on the move while using them. The interactivity of mobiles is the main aspect. Audiences like to be able to use the devices and for them to react in split-second time. Synergy has been a big part of the mobile phone system. With the introduction of SMS messaging, many poll and television shows now offer text number as well as telephone number to vote for things. Text alerts from film and television guides also allows companies to build a bond between different medias like mobile phone technologies. In recent months, convergence of mobile phones has been evident with video technologies. A new company called '3' used guerrilla advertising to promote their new system. Around the UK, the '3' logo was placed around London with nothing but a website. As the months passed a new television ad came out which explained that '3' was a new phone company and that they will be the first phone network in the UK to offer phone conferencing. This kind of system has only previously been seen on the Internet and now it can be done portably, it has built up a lot of interest with audiences. This new experience for audiences will make them want the product so they can try it out and experience this new phenomenon for themselves. Asher Burrell 28/04/2007 Miss Dignum ...read more.