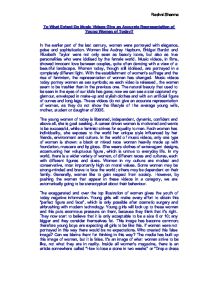 To What Extent Do Music Videos Give an Accurate Representation of Young Women of Today?

To What Extent Do Music Videos Give an Accurate Representation of Young Women of Today? In the earlier part of the last century, women were portrayed with elegance, poise and sophistication. Women like Audrey Hepburn, Bridget Bardot and Elizabeth Taylor were not only seen as beauty icons, but also as true personalities who were idolised by the female world. Music videos, in films, showed innocent love between couples, quite often dancing with a view of a beautiful landscape. Women today, though still idolised, are portrayed in a completely different light. With the establishment of women's suffrage and the rise of feminism, the representation of women has changed. Music videos today portray women as sex symbols; as each video is released, the women seem to be trashier than in the previous one. The natural beauty that used to be seen in the eyes of our idols has gone; now we can see a star captured my glamour, enveloped in make-up and stylish clothes and with an artificial figure of curves and long legs. These videos do not give an accurate representation of women, as they do not show the lifestyle of the average young wife, mother, student or daughter of 2005. The young woman of today is liberated, independent, dynamic, confident and above all, she is goal seeking. ...read more.

Each video creates an image for the artist, which brings more competition to come up with an original and unique video as well as song. Some of these videos are targeted mainly at men, so that the producers can win over a male audience. They show women as what men want them to be like, not what they really are. In female hip hop artist Khia's video of her song My Neck My Back, the women are shown as sluts. Many male artists talk about women in a negative way in their songs, they talk about how women are there to serve them. These songs demean women enormously. My Neck My Back is a female artist's song and is the most degrading song for women. It uses revolting language and describes sexual actions. She refers to herself as a "bitch" and talks about sex in a repulsive manner. There are four women in the video, who are wearing brightly coloured bikinis and are washing a car. There are two men standing across the street from them, and they are watching them. Everything the women do is related to sex; therefore the men are smiling throughout the video because of the sexually appealing movements. The camera focuses on the women and zooms in on their breasts, thighs and lips. ...read more.

In this verse he says "all I gotta do is tell a girl who I am, ain't no chick in here that I can't have". This suggests that men have this power over women and that women are really nothing without men. Today's music video's are very hypocritical; on one side they say that women are independent and can survive on their own and on the other hand they say that women are naturally in need of men and are at their service all the time. Hip hop artists seem to have this idea that the only way their record will do well is if the video is sexually appealing and has women exhibiting themselves in ostentatious clothing. No one realises that when an audience views women throwing themselves at men, they feel quite saddened by the fact that there is no innocence left in these young women. If the producers of these videos knew that their own daughters were acting in the same disgusting ways as the women in music videos, they would want to ban them straight away. In the same way, as a viewer of these videos, I feel that the female society is being fooled in to believing that they are something which is not true to life; they are being influenced by women who are not true to life, in a world which is not real. ?? ?? ?? ?? Roshni Sharma ...read more.