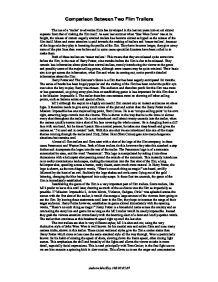 The use of a 'trailer' to advertise films has developed in the last ten years into an art almost separate from that of making the film itself. As seen last summer when 'Star Wars Fever' was at its height, the release of certain eagerly awaited trailers has become almost as hyped as the release of the film itself. More and more attention is paid towards the making of trailers and 'teaser trailers', because of the huge role they play in boosting the profits of the film. They have become longer, they give away more of the plot lines than ever before and in some cases specialist directors have been called in to make them. Both of these trailers are 'teaser trailers'. This means that they are released quite some time before the film, in the case of Harry Potter, nine months before the film is due to be released. They contain less information about plots than normal trailers, merely introducing the viewer to the genre and possibly some of the major selling points, although some teasers may be quite minimal. ...read more.

Woo is particularly known for his habit of altering the speed of shots, slowing down the frame speed, often during fight scenes. This emphasises the skill and brutality of the fights and allows the viewer to take in more detail, especially facial expressions. This is used principally with Tom Cruise; in the first fight scene we see him execute a spinning kick in slow motion. This allows us to see the anger and concentration on Cruise's face and also puts more emphasis on the fluidity of the movement - the swinging of Cruise's hair following his movement catches the eye. Up until halfway through the MI 2 trailer, there are almost no fast action scenes at all. It is filmed with long, sweeping, panoramic shots, some more than 5 seconds in length. Fades are used instead of straight cuts to add continuity and 'mise en scene' shots are used to show the size and scope of the landscape. And then, louder music cuts in, an explosion rips across the screen as his glasses self-destruct and the action begins. A series of short one or two second cuts begins, showing action from the film. ...read more.

The music is quiet and tuneful during calm scenes and when there is a frightening or dangerous scene it is loud and threatening. In MI 2 the music is another intertextuality with the television series, from which the main theme for the music was taken. The soundtrack was commissioned to a cool rock band (again adding status to the film among younger people) but still revolved around the same basic theme. The music doesn't fit around the action going on in the trailer, apart from when the loud guitar theme begins simultaneously with the action sequence. Also it pauses to let Cruise say the only diagenic line at the end. Less care was probably taken with the soundtrack in this trailer, as it would probably be reused during the actual film. This is impossible for a tailor-made soundtrack such as is used in Harry Potter. These 'teaser trailers' are much shorter than a normal trailer would be, and instead of immersing us in plot lines, intend to expose us to high-paced special effects and action, instantly grabbing our attention. However short and uninformative they may be, they are still glimpses of what is to come and so command huge amounts of excitement among dedicated fans. Comparison Between Two Film Trailers Andrew MacKay 10S 03.05.07 ...read more.