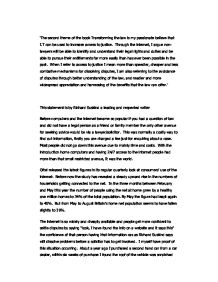 Transforming the law is my passionate belief that I.T can be used to increase access to justice.

'The second theme of the book Transforming the law is my passionate believe that I.T can be used to increase access to justice. Through the internet, I argue non-lawyers will be able to identify and understand their legal rights and duties and be able to pursue their entitlements far more easily than has ever been possible in the past. When I refer to access to justice I mean more than speedier, cheaper and less combative mechanisms for dissolving disputes, I am also referring to the avoidance of disputes through better understanding of the law, and readier and more widespread appreciation and harnessing of the benefits that the law can offer.' This statement is by Richard Suskind a leading and respected writer Before computers and the internet became so popular if you had a question of law and did not have a legal person as a friend or family member the only other avenue for seeking advice would be via a lawyer/solicitor. This was normally a costly way to find out information, firstly you are charged a fee just for enquiring about a case. Most people did not go down this avenue due to mainly time and costs. ...read more.

Signing of forms and documents can already be faxed between customer and solicitor and customer, even when a proof of signature is required, a web camera can be set up and a solicitor can watch a client adhere to all the rules laid out. I would most definitely agree with Richard Suskind theory of what he believes and what is the changing of technology in our every day lifes. From the information I have gathered it seems that smaller companies will be the ones who need to be a head of the larger ones, when it comes to internet services for their existing and future clients. When I compiled a search on the internet for advice it was normally a free service for a limited amount of information, but you then needed to leave details for a solicitor to contact you regarding your question. It rarely states how much a client will be charged for this information, although I did mail a solicitor re a wheel clamper clamping a car. My question was replied to within 24hrs and I did not get charged a penny for it. So then I wished to know how a solicitors firm can make a living from on online based advice centre. ...read more.

Eventually perhaps, but twenty five years may well be too short a. The second reason is lawyer-centred. A profession that is notorious for its adherence to traditional practices and work methods will not surrender them readily or lightly. This is particularly so in Britain at least, where the negative experiences that many lawyers have had with IT over the last twenty five years have left the profession suspicious of claims that IT can be of direct benefit to the operational side, as opposed to the administrative side, of legal practice. A single human generation is simply not long enough for the profession to be converted wholesale from casework lawyering to legal knowledge engineering. The third reason is to do with the nature of concept shifts themselves. New concepts tend to take up earlier paradigms rather than to eradicate them. The new legal world will be characterised by a greater variety of ways of practising law. This variety will undoubtedly include the engineering and marketing of legal information products as well as, no doubt, the provision of education and support services offered in connection with the use of such products. However, it is predicted that one-to-one casework will continue to be an important service demanded by clients and provided by lawyers a quarter of a century from now. ...read more.