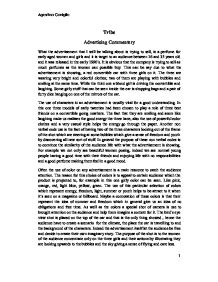 Tribe Perfume Advertising Commentary. The use of characters in an advertisement is usually vital for a good understanding. In this one three models of early twenties had been chosen to play a role of three best friends on a convertible going nowhere.

Tribe Advertising Commentary What the advertisement that I will be talking about is trying to sell, is a perfume for early aged women and girls and it is target to an audience between 16 and 35 years old and it was released in the early 1990�s. It is obvious that the company is trying to sell as much perfumes as the women can possible buy. This can be say due to what the advertisement is showing, a red convertible car with three girls on it. The three are wearing very bright and colorful clothes; two of them are playing with bubbles and smiling at the same time. While the third one a blond girl is driving the convertible and laughing. Some girly stuff that can be seen inside the car is shopping bags and a pair of furry dice hanging on one of the mirrors of the car. The use of characters in an advertisement is usually vital for a good understanding. In this one three models of early twenties had been chosen to play a role of three best friends on a convertible going nowhere. ...read more.

Indeed the advertisement itself let the audience be free and decide to create their own imaginary story. The purpose of the shot is to the women of the audience concentrate only on the three girls and their actions by illustrating they are looking upwards to the bubbles and the sky giving a sense of flying and care less. Yet the objects for the setting have become essential parts of an advertisement and their use often has been successful. Despite the fact that there's only a car for the setting it does not mean the advertisement itself is not effective, the fact that it is only a car what it is showed it feels like a door open to imagination had been opened. It could be said that by not showing where the car is going to, the viewer feels a lit bit freer to build up their own story. And by having a car with no roof perhaps we can connote that there no limit for such story. As well as the use of bubbles flying through the top of it gives a sense of freedom youth and inspiration, despite the fact that using bubbles give a touch of fresh and new to the product perhaps. ...read more.

For the use of uprising in the one hand it could be said uprising is meaning a search perhaps the looking up into the bubbles or beyond or it also could be said that is mean a sort of rebellion with a youth aspect as the girls have. Indeed another connotation we can make is that the perfume actually will give you a sense of an emotional, physical or economic uprising. Finally I could say the advertisement due to its characteristics could be very successful at achieving its purpose of promote this perfume on girls. I think it should be placed where where it would be seen by the target audience. For example fashion magazines for teenagers and young women, also the idea of placing it on a billboard on a street or a shopping. In conclusion I think I should add to it to it be more effective and have a bigger impact is by adding a sort of symbol to the perfume so the target audience can recognize the perfume even if the name of it is not there. Also showing the product in a bigger image o to include it somewhere in the car, for example the shopping bags or the girl's hands. ?? ?? ?? ?? Agostina Coniglio 1 ...read more.