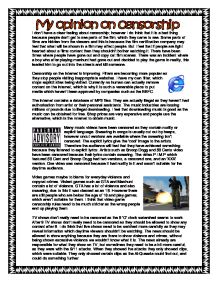 I don't have a clear feeling about censorship; however I do think that it is a bad thing because people don't get to see parts of the film, which they came to see. Some parts of films are hidden from the viewers and this is because the film certification company may feel that what will be shown in a film may affect people. But I feel that if people are light hearted about a films content then they shouldn't bother watching it. There have been times where people have gone out and copy cat film scenes. There was an incident where a boy who after playing manhunt had gone out and decided to play the game in reality, this leaded him to go out into the streets and kill someone. ...read more.

The music industries are loosing millions of pounds due to illegal downloading. I feel that downloading music is good as the music can be obtained for free. Shop prices are very expensive and people use the alternative, which is the Internet to obtain music. Many music videos have been censored as they contain nudity or explicit language. Swearing in songs is usually cut out by beeps, however uncut versions are available where the swearing isn't censored. The explicit lyrics give the 'cool' image to the artists. Therefore the audience will feel that they have achieved something because they listened to explicit lyrics. Artists such as Snoop Dogg and 50 Cents video have been censored because their lyrics contain swearing. The video P.I.M.P which featured 50 Cent and Snoop Dogg had two versions, a censored one, and an 'x*x' version. ...read more.

TV shows don't really need to be censored as the 9 'O' clock watershed seems to work. After 9 TV shows don't really need to be censored as they should be allowed to show any content after 9. I do think that live shows need to be watched more carefully as they may reveal information which daytime viewers shouldn't be watching. The news should be allowed to show anything because they are there to show violence and crimes, without being shown excessive violence we wouldn't know what it is. The news already are responsible for what they show on TV, but sometimes they need to be a bit more careful, as they were with the 9/11 attacks. When they showed the attacks they only showed clips, which were suitable. They only showed certain clips as the Al-Queada could find out, and could do something further. ...read more.